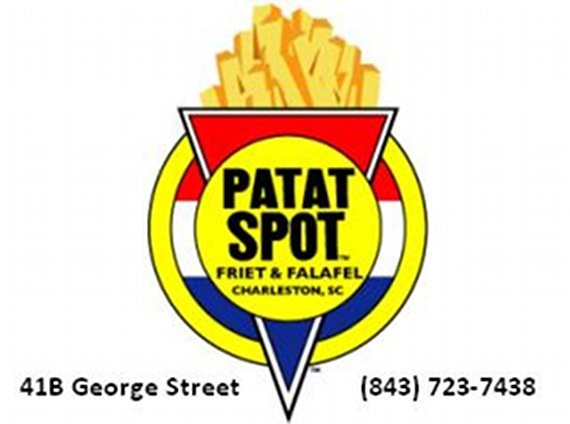 Update: Check out the mini-review and photos.

I know we're probably a little too excited about their opening, but since the Charleston City Paper chatted up the owner and has a few more details about the type of food and the Mair's passion, I figured it was worth one more update.

And don't forget that their opening on George Street will coincide nicely with the Second Sunday on King Street.

Update January 6, opening: They're due to open their doors on Saturday, January 8, at 11 a.m.

First reporting: A new European style snack bar, Patat Spot Friet & Falafel, is coming to the heart of historic downtown Charleston at 41B George Street and will open its doors by the end of December.

Patat Spot Friet & Falafel will feature hand cut Patat Friet, Dutch style potato fries and handmade Falafel. You can enjoy your falafel in their delicious pita pocket or opt for their “Garden Spot” feature, a 5 foot long salad bar. Patat Spot’s Falafel is very unique, using two kinds of beans, just as they do in the Middle East and their delicious Garden Spot salad bar will be loaded with options including local vegetables and tasty sauces that you add to your own falafel.

The brainchild of Charleston native Phillis Kalisky Mair and husband Jeff Mair, Patat Spot Friet & Falafel was a dream they’ve had since their 2003 honeymoon. Kalisky, a College of Charleston graduate and 24 year food and beverage industry veteran, realized the need for a place for people to enjoy the foods she loved as a child traveling to Holland with her Dutch mother. “Food is my passion and being a native of Charleston, I couldn’t imagine anything better than offering delicious street food like patat friet and falafel to my hometown.”

Many of the products will be shipped directly from Holland including real friet sauce, sate sauce, mayonnaises, curry ketchup and garlic sauce. They will also create their own specialty sauces in-house.

For more on Patat Spot, here's a link to their Facebook page.