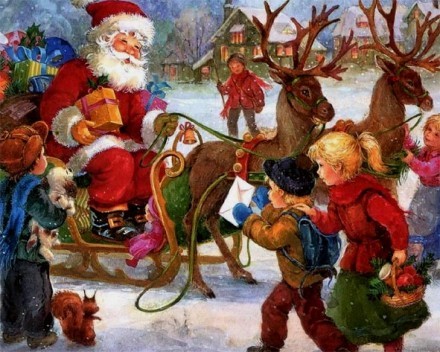 “He was chubby and plump, a right jolly old elf,...He sprang to his sleigh, to his team gave a whistle, And away they all flew like the down of a thistle. But I heard him exclaim ‘ere he drove out of sight, ‘Happy Christmas to all and to all a good night.’” Clement Clarke Moore, 1779-1863

In olden times the dark days of winter were greeted with feasting and merrymaking. Many of the celebrations included a magical figure bringing gifts in the night, especially gifts for children.  Anne Bowers Rodgers remembers being certain she heard Santa’s sleigh and bells on her roof as a child, a memory she cherishes. As preparations for Santa get underway in Charleston, we wondered, where did the American Santa come from?

One of our oldest Santa figures is the British Father Christmas. Wikipedia cites the Norse God Odin as also influencing Santa. Norse children filled their shoes with hay, sugar and carrots for Odin’s horse and found them miraculously filled with gifts in the morning.

St. Nicholas had a significant influence on Santa. Nicholas was born around 280 AD in the city of Patara on the Mediterranean Sea. Nicholas was a kind and religious man. He became a Bishop and was famous for his generosity. Stories of his deeds include a poor man with three daughters, who had no money for their dowries. The girls were in danger of being sold into slavery. St. Nicholas came in the night and threw three bags of gold into the house, saving the girls. The gold landed in shoes or stockings, which had been hung by the fire to dry. Nicholas soon evolved into Sinterklaas, who brought presents to children.

According to James Giblin, in “The Truth About Santa Claus,” the American version of Santa Claus began to evolve in 1624 with the Dutch settling the New World in a place they called New Amsterdam. St. Nicholas celebrations in the new world were festive but the British soon took over New Amsterdam and renamed it New York. Father Christmas and St. Nicholas began to merge into our modern Santa Claus.

“’T’was the Night before Christmas,” by Clement Moore in 1823 significantly shaped America’s Santa Claus.  Moore’s depiction had Santa riding in a sleigh, coming down the chimney and with eight reindeer. The ninth, Rudolph, appeared in 1939.

Cartoonist Thomas Nast was the first to draw Santa in 1862. His drawings proved Santa fatter than the tall and thin St. Nicholas and settled him at the North Pole, keeping lists of the naughty and nice. Nast and Moore had resolved matters!

Sometimes the simplest things bring the greatest joy. Betty Gribble Shuler Acord remembers, as a child of 6, in 1945 that her dad was away working. All she wanted for Christmas was to see her Dad, who “hung the moon and stars.”  When he unexpectedly returned home with oranges, candy and gifts, she was ecstatic.  Bonnie Loughhran Marshall remembers Santa’s elves coming on Christmas Eve to help her Dad finish a bookshelf, he was building for her.

Dottie Nicholson’s daughter carried on the tradition of leaving carrots for Santa’s reindeer. Nancy Henry Pitts remembers as a child, with six kids in her family, they got fruit, candy and nuts under the tree. This inspired her to be very generous with her son! Denton Higdon remembers a red pedal tractor Santa brought, and as a child leaving out milk and cookies for Santa. He also talked with Santa on the radio. For Diana Marie Reed, Santa Claus is the spirit of giving and showing we care.

In the famous editorial, “Yes, Virginia there is a Santa Claus,” Francis P. Church believed Santa would exist as long as “love and generosity and devotion exist,” and that; “The most real things in the world are those that neither children nor men can see.”

Dr. Gordon Mercer is past president and on the Board of Trustees of Pi Gamma Mu International Honor Society and professor emeritus at Western Carolina University. Marcia Gaines Mercer is a published author and columnist. They were married in Charleston and have a place in nearby Garden City.