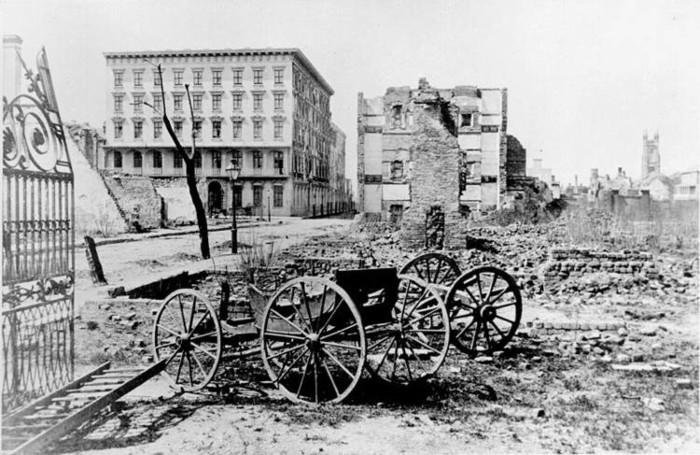 1:17 am on Monday April 9, 2012 | Posted by Ken Hawkins
Documenting the emotional and mental tolls of the Civil War on society

Image by Library of Congress The ruins of Mills House and nearby buildings in Charleston at the end of the war. Charleston was hit hard by the war, a devastating fire, and general economic upheaval.

Binghamton University historian ﻿Diane Miller Sommerville has been digging through Civil War history to how a 19th century civilization dealt with 21st century problems of battlefield stresses and economic hardships.

From a university release:

In examining the personal and societal costs of the Civil War in the South, Sommerville found that southern men and Confederate soldiers were “constrained by ideas of manhood that are shaped by ideas about courage and honor.” In the 19th century, courage was defined as not acknowledging fear. “It was manly not to acknowledge that you were afraid,” she says. “By the 20th century, courage is actually knowing that you are scared but are managing it. The 19th-century soldier had not yet realized that.”

This led some soldiers to commit suicide before going off to war, en route to battle or after the fighting. “To go home a failure or a coward was not an option because it would taint them for the rest of their lives,” Sommerville says. “The dilemma for many young men was: ‘What do I do? I’m afraid to fight but I can’t go home because I’ll be labeled a coward.’”﻿

Southern women, meanwhile, were sometimes drawn to suicide because of the deaths of loved ones. They often found themselves in the unusual situation of no longer being protected or provided for by their husbands. “In war, that arrangement is thrown out the window, and these women are asked to deal with new roles in society,” Sommerville says. “They have to protect their homes and children, and they have not been prepared to do this.”﻿

The Post and Courier﻿ has also expanded on this a little bit more in a report and adds some Charleston-specific examples.

Those in Charleston not only had to cope with the fallout of the war, a change in economic systems (read: no more slavery), but also the aftermath of the great fire of 1861 and then in 1886 the devastating﻿ earthquake.