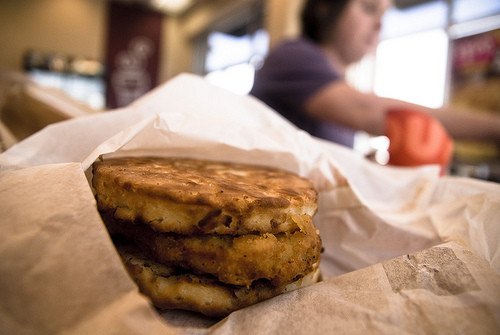 Image by Photo by Ken Hawkins

Yep, you read that right. Dunkin’ Donuts is doing the chicken biscuit dance.

I was fortunate enough to sit and chat with George Ross, CEO of Coastal Franchising for Dunkin’ Donuts, to get the inside scoop on all that goes into a Dunkin’ Donuts Chicken Biscuit.

My first question was the obvious: Why did Dunkin’, a very popular, national chain, known for doing one thing – donuts - decide to add new things such as sandwiches, bagels, and of course, chicken biscuits – to their menu?

Ross: “As Dunkin’ Donuts has grown into a national chain, we have realized the importance of having regional menu items, and in the southeast – as probably the same reason that has prompted you to write this story – in the breakfast business, it’s extremely important to have a first-class quality chicken biscuit product, it is what a large segment of the population is looking for.  I would say it’s based on consumer’s demand or interest from asking us to have one.”

Is it a company recipe?

Ross: “There is an entire culinary team of chefs at the headquarters in Canton, Massachusetts, led by Stan Frankenhalter, that spend their time not only coming up with new product innovation, but the recipes for them as well.  Based on a combination of franchisees and customers asking for the product, the chefs came up with a proper recipe that they thought would be good.  Then you do sensory testing, and develop the product until you think it would be a success.”

What do you think of the new chicken biscuit?  Have you tried it?

Ross: “Yes, I’ve been trying it and involved in testing in sampling it for 6 to 12 months.  It’s takes a long time from product creation to roll-out.  You gotta get it right!  I think the chicken biscuit is the best chicken biscuit on the market, I think both in taste, as well as quality.  I would put it up against any other chicken biscuit out there.

And of course, I had to ask the obligatory, How many donuts do you eat a week?

Ross: “More than my doctor recommends!  More donuts than egg whites, which we now also carry.  You can build your own sandwich, and we have an egg-white flatbread, which is under 300 calories and extremely tasty.  I have a lot of friends that are emailing me saying it’s awesome.”

So it’s obvious that Ross is proud of Dunkin’s new addition, and I was extremely grateful he shared the background information that goes into developing a chicken biscuit for a national chain. Sure, mom and pop are fortunate enough to have an old, family recipe that’s been passed down for generations, but it can be quite daunting to come up with a new recipe for an old favorite that millions of people will taste.

That being said, Dunkin’ Donuts’ chicken biscuit definitely stands on it’s own amongst the other chicken biscuit offerings here in town.  It’s good for a quick bite on the go, and the real kicker - a price tag of $1.99, it’s the cheapest chicken biscuit breakfast in town.  I’d suggest one packet of ketchup, a side of tasty hash browns, and one of Dunkin’ infamous iced coffees to wash it down with.

Don’t forget, we’ve got quite the chicken biscuit photo gallery on our flickr page.  You can also check out the past posts on our chicken biscuit landing page, or grab the RSS feed.