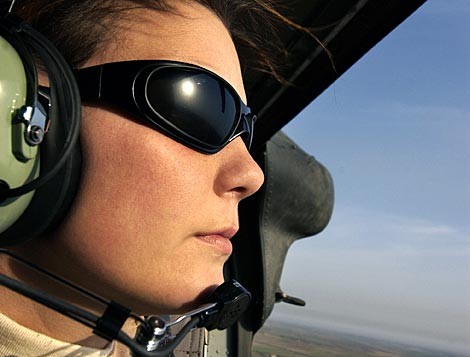 Image by Air ForceImage by 20090226-pearsall.jpg A self-portrait of Pearsall taken in Iraq during 2003.

Bronze Start recipient and Charleston local Stacy Pearsall will be on The Oprah Winfrey Show today. The broadcast goes "on location" at Walter Reed Army Medical Center. The broadcast is today, February 26, at 4 p.m. on NBC.

Here's a bit about the segment featuring Pearsall:

She may look like the girl next door, but Staff Sgt. Stacy Pearsall's camera has captured the horrors of war. After retiring from the Air Force in 2008, she is now pursuing a career as a civilian photographer and continues to go above and beyond the call of duty. She was awarded one of the military's highest honors—the Bronze Star—for pulling wounded soldiers to safety in the midst of an ambush.

Recalling her days on active duty, Stacy says she had to be prepared at all times. "You never know when situations are going to go bad," Stacy says. "And there have been several times where I had to put down the camera and put up the gun."

If there's one thing Stacy wants people to know about women in war, it's that there is no longer a clear front line. "Not in this war. Not in Iraq. Not in Afghanistan. And since those lines are blurred, women are out there doing the same jobs as men. And whether we like to admit it or not, women are on the front lines and we are doing the job," Stacy says. "And it would be great if we could just accept it and accept that women should be able to do whatever they want, whether it's be a housewife or being a combat photographer."

Although her job isn't to fight in combat, Stacy says she's been forever changed by what she's seen through her lens. "I'm still dealing with the issues of the possibility of having taken somebody's life or seeing other lives taken," she says. "It changes you, and you become somebody else when you're there. It's a defense mechanism."

Returning to regular life hasn't been easy, Stacy says. Even though her husband is also in the military, she finds it difficult to share her experiences with him. "It's still hard to articulate the things that you've been through, especially things that are so complicated," she says. "There's so many things he doesn't know that happened out there yet that I'm still working through to be able to share with him."

Stacy says no one who goes into battle comes back the same and urges the families of returning soldiers to be patient. "Like myself, I'm sure it's the same for other soldiers, just to have that support and that guidance and maybe a step in the right direction, whether it's counseling or just, 'Hey, whenever you want to talk, I'm here,'" she says.

And, here's a bit about Pearsall's local ties from an e-mail from the Center for Women:
CFW Member on OPRAH!
CFW member Stacy Pearsall will be featured on ‘Oprah’ Thurs. Feb 26. Stacy is a veteran of the Air Force and served in the Combat Camera Corps. She served two tours in Iraq where she received the Bronze Star and is the only woman to receive the Dept. Of Defense Military Photographer of the Year twice. Stacy is currently the Director of the Center for Photography here in Charleston.

The Oprah Show also has some of Pearsall's photos from Iraq. Today and tomorrow you can view more of those photos at the College of Charleston.