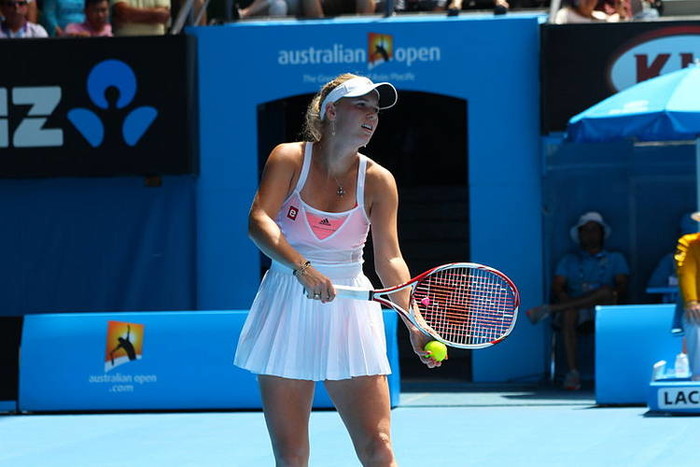 2:25 am on Saturday April 9, 2011
Two days left: The Family Circle Cup heads into the semi-finals

It's down to four at the Family Circle Cup — today those four will battle it out for spots in Sunday's final.

The first semifinal features Caroline Wozniacki and Jelena Jankovic in arguably the most highly-anticipated match-up of the entire week. It has been a tough last few days for current World No.1 Wozniacki, who faced set points in both sets of her 76(6) 76(9) third round win over No.15 seed Barbora Zahlavova Strycova and trailed 4-2 in the third set of her 46 64 64 quarterfinal win over No.6 seed Yanina Wickmayer. But she has overcome all of that to make the semis here for the third time in three tries.

Jankovic, a former World No.1, has had the complete opposite path to the semifinals, losing a total of just 11 games in her first three matches combined, most impressively a 62 60 quarterfinal win over American Christina McHale. Jankovic has already conquered the Family Circle Cup, winning it in 2007, and her 4-1 head-to-head lead over Wozniacki could come into play as well, although Wozniacki's one win did come in their last meeting, in Dubai earlier this year.

While the No.1 and No.3 seeds square off in the first semifinal, a pair of underdogs have made it through to the semifinals on the bottom half of the draw. No.11 seed Peng Shuai has won more matches than anyone on the WTA this year (including Wozniacki) and will face Elena Vesnina, who beat No.12 seed Julia Goerges in the late quarterfinal on Friday night. Peng is 4-1 lifetime against Vesnina, including a win in the second round at this very tournament last year, by a 75 26 62 scoreline.

Both doubles semifinals will also take Stadium court on Saturday, with the first semifinal of particular note as it features two of the best teams out there, Kveta Peschke and Katarina Srebotnik (the No.1 seeds here) and Bethanie Mattek-Sands and Meghann Shaughnessy (seeded No.4).﻿

You can snag Saturday's schedule here.﻿

You can keep up with scores at the FCC's Twitter account andwatch many games online, or you could get old fashioned and go in person.﻿﻿