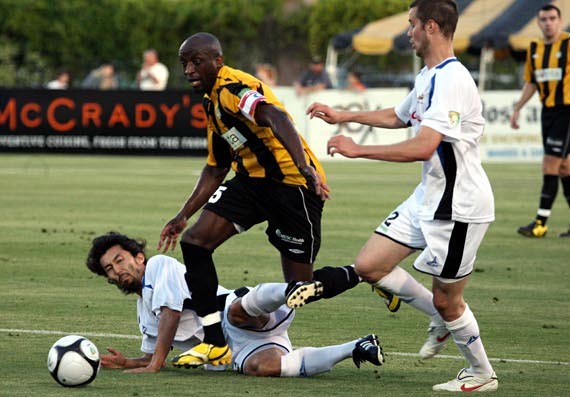 The Charleston Battery lost 2-0 to the Charlotte Eagles on Saturday night at Blackbaud Stadium in front of 4,437. After a scoreless first half Charlotte broke the deadlock in the 48th minute with a close-range finish from midfielder Nate Thornton. The Eagles added a second ten minutes from time as Charleston lost a second consecutive game.

Despite the loss the Battery (10-5-0) remains in second position in USL PRO four points behind the league-leading Orlando City Lions. Charlotte (5-8-2) moves up into a tie for seventh position in the tables.

The first half was very even with good chances for both teams. Charleston best opportunity came in the 36th minute after Jose Cuevas slipped a pass through for Tony Donatelli. Donatelli faked a shot to evade his marker but saw his left footed attempt well saved by Eagles goalkeeper Clint Irwin.

Just before half-time Charlotte also came very close with a good ball down the right side to forward Christian Meza. Meza struck a shot on frame but the attempt was smothered by Battery goalkeeper Brock Duckworth.

Charlotte opened the scoring just after half time with a goal by midfielder Nate Thornton. The ball was lifted forward to Mauricio Salles at the edge of the box who lofted a header ball to the penalty spot for Thornton to receive and slip past Duckworth.

Charleston tried to respond and Cuevas volleyed over the bar two minutes later after an excellent cross in form the right flank. Charleston continued to press and Ryan Richter found substitute striker Dane Kelly eighteen yards out in the 69th minute but Kelly lifted his shot over the bar.

Charlotte put the game beyond doubt in the 79th minute when Juan Guzman took a one time shot at the top of the 18-yard-box that deflected off a Battery defender and into the net.

The Battery and the Eagles will face off again tonight at Charlotte Christian High School Stadium; kick off is set for 8 PM (1340 AM). The Battery returns home next Saturday, July 14th to play the Wilmington Hammerheads at 7:30 PM.

The Battery (10-4) enters the weekend in second place in the USL PRO standings four points behind the league-leading Orlando City Lions but having played one game less.

The Battery is back at Blackbaud Stadium after splitting a two-game series last weekend versus Antigua Barracuda FC down in Antigua. Charleston won the first match 2-0 but dropped the second game 1-0 in an often heated match that saw Charleston receive its first red-card of the season as defender Cody Ellison was sent off midway through the second half.

Charleston and Charlotte have played once already this season with the Battery defeating the Eagles 3-0 behind goals from Tony Donatelli, Ryan Richter and JC Mack. That game was played at the University of Winthrop Stadium back on April 17.

The Battery and the Eagles share a twenty year rivalry and along with fellow USL PRO side the Richmond Kickers are the longest continuously operating professional soccer teams in the United States.

The Charleston Battery first played the Charlotte Eagles in both Clubs' inaugural seasons back in 1993. The teams met twice that year with the Battery winning both games, 3-1 at home and 1-0 in the return fixture.

Over the past twenty years the teams have met 31 times in competitive fixtures (regular season, post-season & US Open Cup) with Charleston winning twenty-two games, losing five with four ties.

Immediately following the game on Friday night there will be a Fireworks Display.

Friday's game is the first of a two-match series the Battery and the Eagles will head to Charlotte, NC on Saturday night for the second game. Both games will be broadcast live on 1340 AM.