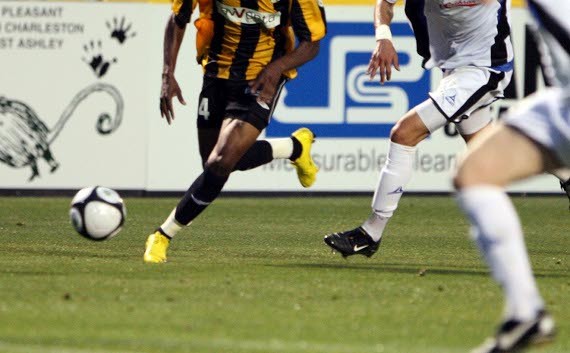 10:37 pm on Saturday July 23, 2011
Battery backed into tie on road against Lions, team edged down to fourth in league

Nicki Paterson scored twice but the Dayton Dutch Lions rallied to deny the Charleston Battery victory as they fought back to a 2-2 tie Saturday at Miami Valley Stadium.

Paterson put the Battery ahead twice in a thrilling first-half but Dayton answered on both occasions.

With the draw the Battery (9-6-5) drops into fourth position in the USL PRO American Division one point behind Richmond and Wilmington who are tied for second spot.

Charleston opened the scoring in the 13th minute with some dogged attacking play by the Battery’s center-midfield pairing.  Alex Caskey fought and won the ball inside the penalty-area and set it back for Paterson twenty yards out.  Paterson ran onto the pass and lashed a shot into the top left corner.

Five minutes later the lead was cancelled as George Davis IV was first to the loose ball following an errant clearance by Charleston.  Davis timed his run well and clipped the ball home past Battery goalkeeper Andrew Dykstra from close range.

In the 37th minute veteran midfielder Kevin Jackson was denied his first goal of the season by a superb save from Dayton goalkeeper Brian Visser.  Jackson hit a heavy driven shot from outside the box but Visser dove to his left and tipped the ball away.

Paterson scored his second in the 41st minute after a nice move that was started by midfielder Zack Prince. Prince back-heeled the ball to forward Seedy Bah who lifted it over the defense for Paterson to run onto.  With Visser charging off his line Paterson accelerated to the ball and thumped it home.

Dayton drew level again just before the break with a headed goal by defender Happy Hall from a corner.  The ball was whipped in at pace and the Battery failed to clear as Hall ghosted in at the back post.

Both teams had chances in the second half with the best falling to Dayton’s Van Der Pluijm three minutes from full-time.  Van Der Pluijm made diagonal run onto a pass ten yards out but his hard shot was saved superbly by Dykstra who just managed to push the ball around the post.

Next up for the Battery is an international exhibition match against England’s Portsmouth FC on Wednesday night at Blackbaud Stadium; gates open at 6:00 PM with kick off set for 7:30 PM ($20 - $25, 971-4625 / charlestonbattery.com).