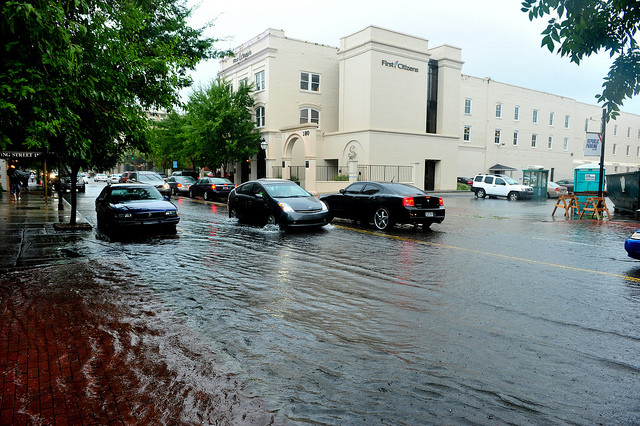 2:59 am on Wednesday March 30, 2011 | Posted by Ken Hawkins
Welcome to a wet spring in Charleston: The rain's here to play this week (updated)

Update March 30: The crazy rain is back.

Today there's a, well, here it is straight from the National Weather Service: "chance of rain and thunderstorms between 8am and noon, then rain and possibly a thunderstorm after noon. Some of the storms could produce heavy rainfall.

High near 68. East wind at 6 mph becoming south. Chance of precipitation is 100%. New rainfall amounts between a half and three quarters of an inch possible.

Tonight: A chance of showers and thunderstorms. Patchy fog. Otherwise, cloudy, with a low around 52. North wind around 5 mph. Chance of precipitation is 40%.

Thursday: Showers and thunderstorms likely, mainly after 2pm. Cloudy, with a high near 59. North wind between 5 and 8 mph. Chance of precipitation is 70%. New rainfall amounts between a tenth and quarter of an inch, except higher amounts possible in thunderstorms.

Thursday Night: Showers and thunderstorms likely before 8pm, then a chance of showers. Mostly cloudy, with a low around 46. North wind between 6 and 8 mph. Chance of precipitation is 60%. New rainfall amounts of less than a tenth of an inch, except higher amounts possible in thunderstorms.

First reporting March 28: While Charleston missed out on the crazy weather down in Beaufort, all that rainy weather we've been having is expected to stick around for some time.

While it's expected to keep drizzling all day on Monday, expect the most rain around lunchtime, gradually tapering off toward 5 p.m and into the evening. And the cooling trend will continue with a high in the mid-low 50s.

But rejoice on Tuesday, as it will likely be our only touch of sunshine this week. High in the mid-60s. Showers will return that evening and pick up for the worst this week on Wednesday with a good chance of thunderstorms and a high in the low 70s. More rain on Thursday.

Get the full forecast over here.

As always with rainy weather, beware of flooding, especially in the low-lying areas on the less-historic parts of the Charleston peninsula. That said, tides for the next week aren't expected to be especially high, but that's of little help during a strong downpour.

Remember: If you can't see the bottom of the road, don't drive through it.