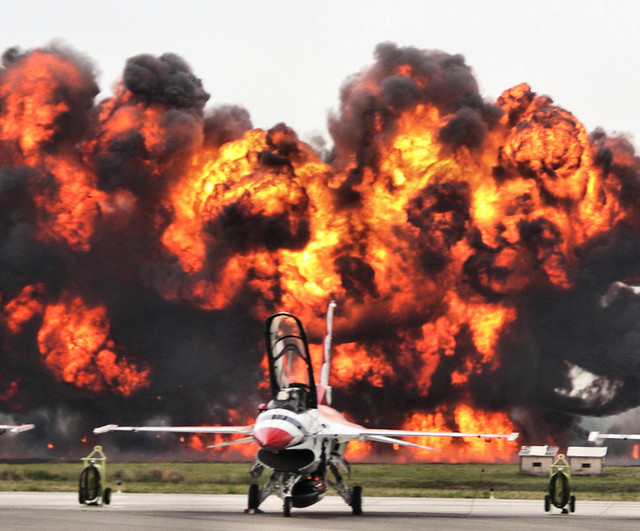 Image by Flickr user montwerx Surprisingly not an alarming view, the Japanese attack on Pearl Harbor﻿ was re-enacted on Saturday.

Update April 10, post-coverage: In spite of the record heat some 80,000 turned out for the Charleston Air Expo to see the Thunderbirds, a re-enactment of the Japanese attack on Pearl Harbor, and general aviation fun.

Oh, and to hide in the shade of the large planes (there aren't many trees on a tarmac.)

As usual coverage abounds, here are links to the best I've seen.

Lastly, a couple days back the Charleston City Paper hitched a ride on one of the old T-6 Texans that would be at the air show, and now they have a nice video to share of the plane ride; watch that here.

Update April 9: Today's the big day (along with a ton of other choices in Charleston.)

If you're headed up, check out the traffic details below and know that The Post and Courier has published a lovely primer and schedule (read it here) and has a handy map (see it here.)

Local photographer/geek Joseph Nienstedt also has some nice shots from the practice runs; see those here.

Update April 8: We have some more details about attendance and parking information for all of you interested in the Air Expo.

The event is free to the public; parking is also free. Gates open at 8 a.m., and the flight demonstrations begin at 10 a.m. The gates will close to incoming traffic at 2 p.m. If you're coming from Daniel Island, Mt. Pleasant, or West Ashley, use the Dorchester road gate. On the other hand, if you're coming from downtown or travelling on I-26 east, use the gate off of Aviation Avenue.

Update March 24: We've received some additional information on The Geico Skytypers, the only civilian flying unit in the world to use World War II-era planes.

The Geico Skytypers use 6 of the remaining 11 WWII North American SNJ-2 planes left in the world to create messages at an altitude of 10,000 feet forming letters in a dot-matrix-like pattern. Each plane has been restored and is specially equipped and modified with a small, custom-built computer that commands the ‘smoke puffs’ in each of the aircraft.

During Skytypers performances on Saturday April 8th and 9th, pilots will fly 250 feet apart in a wide line abreast formation and when aligned, the ‘puffs’ form letters as tall as the Empire State Building. Because pilots create one letter every four seconds, ‘skytyping’ is 17 times faster than skywriting – entire messages can be as long as six to eight miles and on a clear day and can be seen for 15 miles in each direction.

In addition to skytyping, the team also performs a low altitude, precision formation flying routine combined with a thrilling aeronautical demonstration. The six aircraft fill the sky and come from all directions providing spectators a unique viewing experience.

Also announced is the high-speed maneuver air show courtesy of the Air Force's Thunderbird team. According to The Post and Courier, "Other acts scheduled will be the U.S. Army Special Ops Black Daggers jump team, along with other Air Force and civilian aircraft."