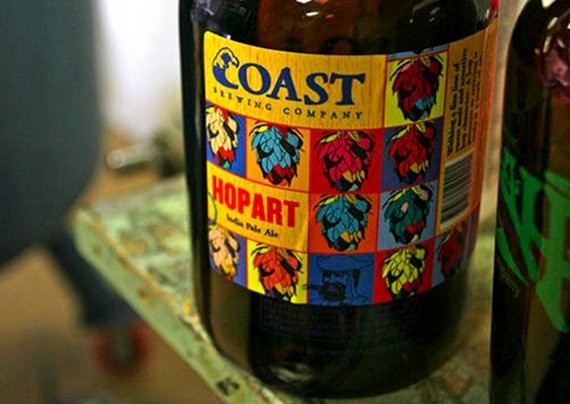 Image by Flickr user maryaustinphoto Boy King has no label. The hops scare the adhesive.

In lieu of a run-of-the-mill Rare Beer Tuesday, the Charleston Beer Exchange brigade is throwing the latest batch of Boy King Double IPA from COAST Brewing on the growler station at 5 p.m.

On the one hand, Boy King is not especially rare.  In fact, it went on the CBX growler station just Saturday morning.  On the other hand, the keg was gone in a matter of hours.

The tale of the Boy King is an interesting one.  Debuting last Spring as COAST's first double IPA, it was met with the local beer fanfare associated with any of their new brews.  We wrote about this year's Spring batch.  So did the City Paper.  Business as usual, right?

Wrong.  Something happened when the Spring 2010 batch came out.  Through some magical confluence of a killer recipe, trade-happy beer geeks, and a dash of internet hype, Boy King became nationally known.  It currently sits at #58 on BeerAdvocate's Top Beers on Planet Earth, sharing the top 100 with legendary DIPAs like Pliny the Elder, and beating out the likes of The Oracle and Pure Hoppiness.  I'm not sure if it's a Cinderella story, but it's pretty damned cool nonetheless.

Boy King weighs in at 9.7% ABV, gets a A from BeerAdvocate, and a 95 from RateBeer.  This off-season batch was brewed in celebration of the passage of H 4572, and has a bit more Citra hops than its predecessors.  The hop varietal is noted for imparting tropical flavor notes to beer -- think mango, pineapple, etc.  Having plowed through a growler this weekend, with a little help, I can promise this is a hop force to be reckoned with.  While it demonstrates COAST's commitment to balance, there is enough fruity hop aroma and taste in there to prevent scurvy.