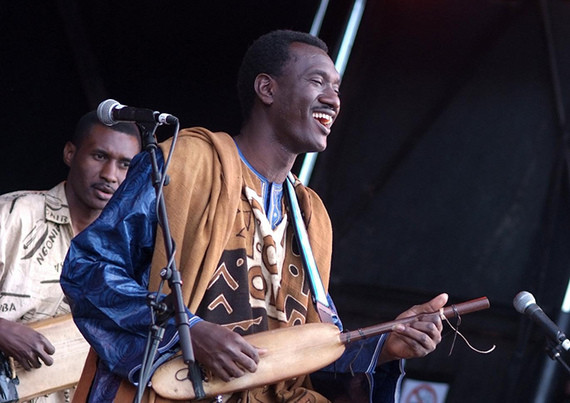 7:19 am on Friday April 2, 2010 | Posted by Amanda Click
Here is what's getting us hyped for Spoleto: Bassekou Kouyate & Ngoni Ba

Image by Flickr user richardkaby Kouyate jamming out on his ngoni on stage.

Malian sensation Bassekou Kouyate & Ngoni Ba wil be taking the stage on the College of Charleston's Cistern Yard for an unforgettable night of Bambara music - the closest form to blues that exists in Africa.

Bassekou leads Ngoni Ba, the first-ever group built around not one but four ngonis, the ancient traditional lute found throughout West Africa, all played by members of his family.

Read more stories on this subject in our Spoleto topic page.After the release of their first award winning album Segu Blue, Bassekou Kouyate & Ngoni Ba are back with the recent release of their new album I Speak Fula. The album captures the incredible live energy of the group and is the next step in the career of one of Malis most exciting and innovative musicians.

Kouyate is the star of the show, and his prowess on the ngoni is unprecedented. Kouyate was the first player to ever strap the instrument over her shoulder like an electric guitar and play a solo standing up. Traditionalists started a debate whether this young man was allowed to change the style of playing ngoni, but low and behold, Kouyate's innovate style is now common practice in Mali today.

Sought out by musicians ranging from Youssou N'Dour and Taj Mahal to Bela Fleck and Dee Dee Bridgewater, Bassekou Kouyate is obviously the real deal.

Don't miss the group's single performance on Wednesday, June 9th at 9 p.m. Tickets range from $25 - $40 and are on sale now at the official Spoleto Festival USA Web site.