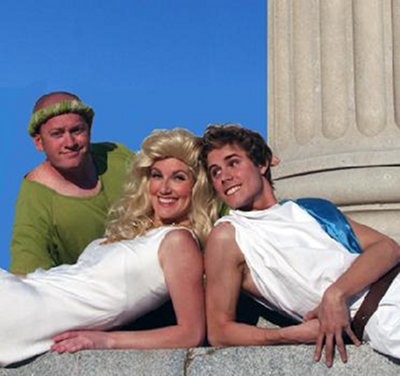 10:17 am on Wednesday May 2, 2012 | Posted by Amanda Click
Footlight Players close 80th season with musical 'A Funny Thing Happened on the Way to the Forum'

Charleston's Footlight Players are closing out their 80th season with the hysterical musical 'A Funny Thing Happened on the Way to the Forum.'

A Funny Thing Happened on the Way to the Forum is fast paced, witty, irreverent and one of Braodway's funniest musicals. Situations from the time-tested, 2000 year-old comedies of Roman playwright Plautus are combined with the infectious energy of classic vaudeville. The result is a non-stop laugh-fest in which Pseudolus, a crafty slave, struggles to win the hand of the beautiful but slow-witted courtesan, Philia, for his young master in exchange for his freedom.

With music and lyrics by Stephen Sondheim and a book by Burt Shevelove and Larry Gelbart (the award-winning writer of the film Tootsie and the M*A*S*H TV series), this hilarious, slapstick farce is regarded by many as a high point in the history of Broadway musical comedy. Be prepared to laugh early and often - as the signature show tune puts it, “Tragedy tomorrow, Comedy tonight!” The musical’s original 1962 Broadway run won several Tony Awards, including Best Musical and Best Book. Successful revivals of the musical were done in 1972 and in 1996 both winning additional Tonys.