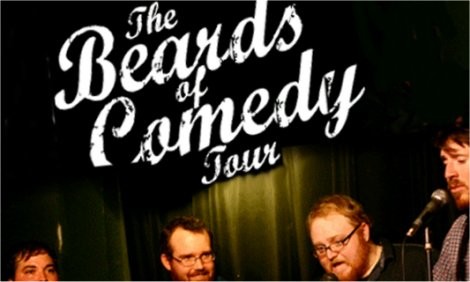 This may just be the biggest and best stand-up comedy show to hit the Lowcountry in quite some time.

2008 Charleston Comedy Festival Stand-up Winner Billy Anderson will be teaming up with a quartet of bearded friends for a night to remember.

Joe Zimmerman (aka "the rebel") hails from Charlotte, NC where he was named Charlotte's Best Stand-Up Comedian by Creative Loafing Magazine. Joe has hosted the Laugh Your Asheville Off Comedy Festival since its inception, and was recently invited to the 2009 NC Comedy Arts Festival, in Chapel Hill.

www.zimmermancomedy.com
ANDY SANDFORD (aka "the sexy one") makes his home in Atlanta, where he headlines many of the premier alternative venues, including The Warren City Club, The Highland Inn Ballroom, the Star Bar, and the Relapse Theater. www.myspace.com/sandfordcomedy

TJ YOUNG (aka "the beard next door") has made his name in Athens, GA, as the founder of Loft Comedy, and winner of Rooftop Comedy's coveted Rusty Nail Award. This past summer, TJ was invited to the Laugh Your Asheville Off Comedy Festival where he was given the festivals highest honor of "Stand-Out Stand-Up." www.tjisfunny.com

Dave Stone (aka "the mega-crazy-spontaneous one") is a road warrior based just north of Atlanta. He has taken his bearded comedy as far away as London, Sweden, and even South America, where he has created a strong Chilean fan base, thanks to his ability to perform in several different languages. Don't believe it? Check him out for yourself... www.myspace.com/davestonecomedy1

This is a must-see show for any and all Charlestonians and Theatre 99 patrons. They look forward to knocking your faces off with their beards...and their humor.