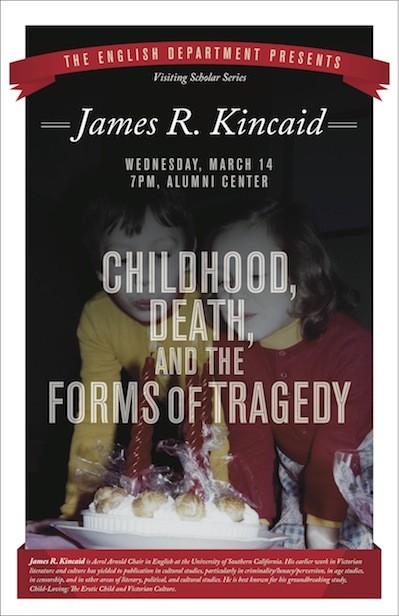 The College of Charleston English Department is pleased to announce that James R. Kincaid, Aerol Arnold Chair of English at the University of Southern California, will be giving a talk, "Childhood, Death, and the Forms of Tragedy," on Wednesday, March 14, at 7 p.m. in Alumni Center (in the School of Education, Health, and Human Performance building).

Kincaid's talk, which is part of the English Department's Visiting Scholar Series, addresses modern forms of tragedy as they connect to likely areas such as death, suffering, redemption, as well as unlikely ones, such as joy, necessity, and childhood. The talk explores the possibility that going home, the impulse to return, is linked to our desire to lose our lonely individuality and merge into a larger whole, a desire located both in nostalgia and a longing for death.

Kincaid is a Guggenheim Fellow recipient, and in 2000 was awarded the University of Southern California's prestigious Raubenheimer award for Outstanding Teaching and Scholarship. He has completed four novels, has been known to make mischief at the annual Dickens Universe conference in Santa Cruz, California and, more recently, adventured among the mad people in "Wonderland and the Mathematical Imaginary," a multidisciplinary discussion sponsored by the University of Southern California Arts & Humanities Initiative.﻿