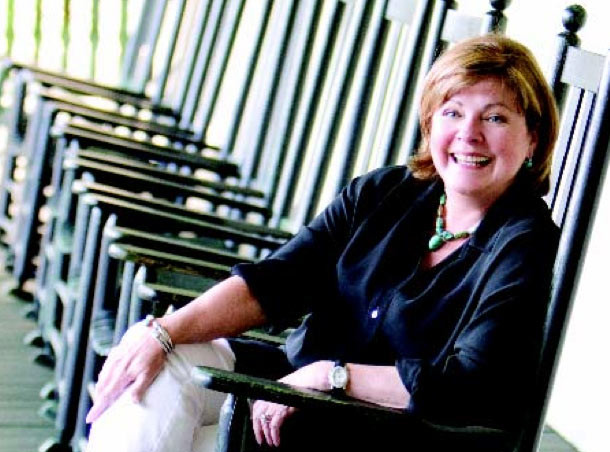 Tickets will be required for family and guests admission to the Carolina First Arena, there will be a limited amount of seating available for non-ticketed guests to view the ceremony.

Over 300 undergraduate and over 42 graduate students will receive degrees during the ceremony.

More information about the ceremony and the honorary degrees for Frank and Merton D. Simpson are below, from a press release:

Frank has appeared on NBC’s Today Show, Parker Ladd’s Book Talk and many local network affiliated television stations. She is a frequent speaker on creative writing and the creative process for students of all ages in both public and private venues. Frank is also a nationally recognized volunteer fundraiser for the arts and education. She was born and raised on Sullivan’s Island, S.C. and now splits her time between South Carolina and New Jersey. Her son William, a history major, is graduating from the College of Charleston at this commencement ceremony and her daughter is an alumna.

“As her millions of devoted readers know well, Dorothea Benton Frank’s novels evoke strong passions for our Lowcountry landscapes, history, and traditions,” said College of Charleston President P. George Benson. “At the College of Charleston, we draw inspiration from these same assets, and we celebrate and nurture our bonds with Charleston and the Lowcountry.”

Dorothea Benton Frank and Merton D. Simpson will receive honorary degrees. An honorary degree is given to someone with an exceptional record of distinction and achievement in at least one of the following areas: scholarship, research, teaching, creative arts, and public service, or manifests outstanding acclaim to the College. In addition, the College confers honorary degrees in recognition of outstanding intellectual or creative achievements in scholarship, high distinction in service to humanity, including meritorious contributions to the College or for exemplary leadership in education, business, public service, or other appropriate sector of society.

Merton D. Simpson is an artist, jazz musician, and world-renowned collector of African art. He was born in Charleston in 1928 and is a graduate of Burke High School. He attended Cooper Union and New York University, but his most valuable arts education came from both his experience working at Benevy’s Frame Shop and from Charleston artist and instructor William Halsey. Halsey taught studio art at the College of Charleston for 20 years, and the Halsey Gallery in the College’s Simons Center for the Arts is named in his honor.

Early in his career, Simpson had paintings in both the Guggenheim Museum and the Metropolitan Museum of Art, New York, that were done in the early abstract style he learned from Halsey. He is one of the first known African-American abstract painters and the first African-American to study at the Gibbes Museum of Art in Charleston. While in the U.S. Air Force he painted portraits of top military officials including General Dwight D. Eisenhower. Simpson is also known for a series of 22 abstract paintings done in the 1960s, during the civil rights era, called the “Confrontation” series. The “Confrontation” series is currently on view in South Carolina in the Greenville County Museum of Art through March 2011. He was one of the world’s foremost authorities on African art. He currently resides in New York, and owns a tribal and modern arts gallery in Chelsea, New York. Although he never returned to Charleston to live, he says growing up here influenced his art for life.