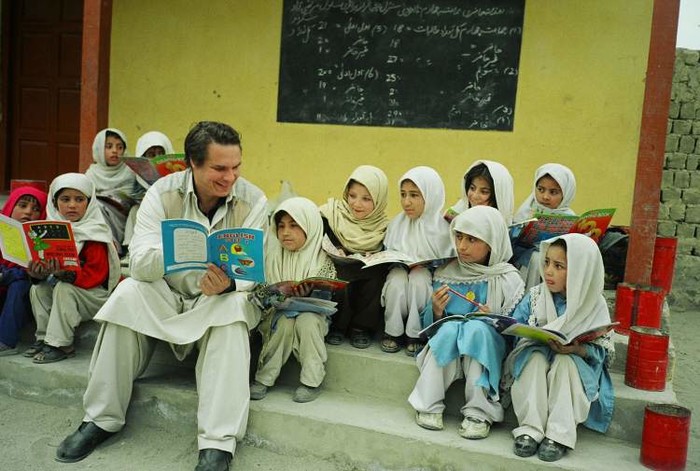 The Post and Courier's Diette Courrégé went by the event and has a write-up to share; take a read here.

Public tickets for “An Afternoon with Greg Mortenson,” #1 New York Times bestselling author of Three Cups of Tea, are available from 9 a.m. until 4:30 p.m. Monday through Friday at the College of Charleston’s Carolina First Arena Box Office.

Mortenson will speak at the Carolina First Arena (301 Meeting Street) on Thursday, November 11, at 5 p.m. Tickets are free and are required for entry and will be given out on a first-come, first-served basis with each individual entitled to two tickets. Ticket holders should be in their seats no later than 4:45 p.m. so that empty seats can be filled by those waiting outside.

The author will not be available to sign books while he is in Charleston.

Mortenson is co-author of the #1 New York Times bestseller, Three Cups of Tea, and author of the new bestseller, Stones Into Schools. He founded the Pennies For Peace philanthropy, and is the co-founder of nonprofit Central Asia Institute. In 2009, Mortenson received Pakistan’s  highest civil award, Sitara-e-Pakistan (Star of Pakistan) for his dedicated and humanitarian effort to promote education and literacy in rural areas for 15 years. As of 2009, Mortenson has established or significantly supports 131 schools in rural and often volatile regions of Pakistan and Afghanistan, which provide education to more than 58,000 children, including 44,000 girls, where few education opportunities existed before.

The College has also launched a Literacy Outreach Initiative (LOI), in conjunction with the College Reads!, that is designed to engage students in literacy-focused outreach both globally and locally. As part of this initiative more than 325 College of Charleston students have been teaching Charleston County K-12 students about the book and participated in the Pennies for Peace campaign