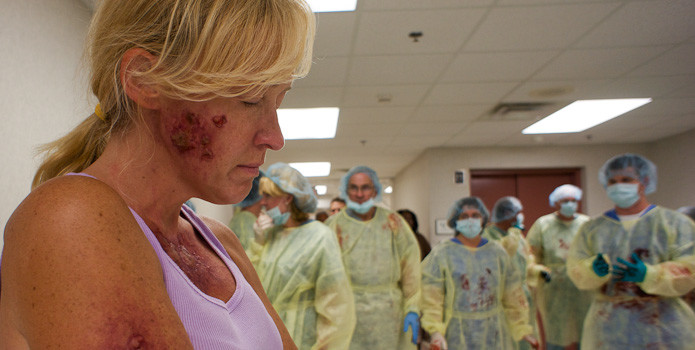 3:09 am on Friday September 14, 2012 | Posted by Melissa Byers
Georgetown-filmed "The Bay" to debut in theaters in Nov (Update: Trailer, petition)

Update at the bottom...

Shot in Georgetown two years ago, "The Bay", a sci-fi thriller were parasites get into the water supply and threaten to wipe out the population, is set to open in theaters on November 2, 2012.

As WPDE reports, the movie was originally titled "Isopod" and will debut in September at the Toroto International Film Festival.

Here's a little on the movie from the film festival website:

A mock-doc eco-apocalypse thriller about a seaside town that becomes a breeding ground for a terrifying nest of parasites.

A creature feature with a message, The Bay is an enjoyably grotesque departure for veteran writer, director and producer Barry Levinson (Diner, Rain Man). Teasing out appealingly natural performances from a cast of relative newcomers, Levinson imbues his all-too plausible story of environmental catastrophe with a sense of urgency and imminent panic that is hard to shake.

The quaint seaside town of Claridge is buzzing with a street fair, crab-eating contests, fresh apple pies, and bathers frolicking on the waterfront as the residents prepare for their annual Fourth of July celebrations. In Claridge, water is the lifeblood of the community. But when two biological researchers find a staggering level of toxicity in the bay, no one is prepared for the horrors that lurk below the surface.

A deadly plague is unleashed, turning the people of Claridge into hosts for a mutant breed of parasite that eats its way into the body of its host, where it then hatches into something even more horrific.

The film was directed by Baltimore native Barry Levinson who also wrote for "The Carol Burnett Show" before doing other features like "Good Morning, Vietnam", "Sleepers", and "Wag the Dog".

According to IMDB, the movie is rated R for disturbing violent content, bloody images, and language.

Update 9/10/12: It looks like "The Bay" which was shot basically in our own backyard down in Georgetown might not be shown anywhere close to here.

The film, which is being released only in select theaters this November, might never find its way on the big screen locally. But one Georgetown woman, Kelly Fuller wants the movie they helped make to be on that "select theaters" list.

Fuller created a petition called 'We made it. Let's see it.' to get the movie shown in Georgetown. She's attempting to get 1000 signatures, but at this time, she still needs more than 950 signatures.

The petition can be found over at Change.org and currently has only 81 supporters. Make sure to head over to CarolinaLive.com for their full write-up and video broadcast.

Update 9/14/12 The trailer for "The Bay" is making it's rounds across the Internet.

Buzzfeed.com's headline for their post featuring the trailer calls it "terrifying" and they go on to say, "Sneak peek at The Bay: the next shaky-cam, found footage movie that will have you pooping your pants."

The film does look pretty good, and Georgetown is all over it. This film might just be another cult hit. Check out the trailer below, and make sure to sign the petition so the folks who helped make it can see it on the big screen.