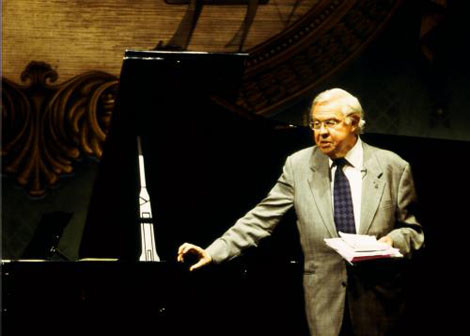 Image by William Struhs/spoletousa.orgImage by wadsworth.jpg Charles Wadsworth, Spoleto's artistic director for chamber music, is "famous for his innovative programming and witty, elucidating commentaries as host," as Musical America put it.

Charleston Wadsworth, who has been Spoleto's artistic director for chamber music since 1977, has announced he will retire from the post after next year's festival. The news came in a surprise announcement during Saturday afternoon's chamber music concert, as The Post and Courier reports:

Those who attended the 1 p.m. Bank of America Chamber Music concert Saturday received quite a surprise when, during a pause in the middle of the performance, director Charles Wadsworth announced that he will retire following the 2009 Spoleto Festival USA.

Following his announcement, Wadsworth, who was reached by phone at his temporary lodgings downtown, said, "I thought carefully about my decision and felt the timing was right. After all, I'll be 80 in May of 2009, which makes 50 years since I began hosting and directing chamber music, starting with the Festival of Two Worlds in Italy in 1959 and with the Spoleto Festival USA in 1977. Now I feel it's about time I went out to pasture and stop performing professionally."

Wadsworth has been with Spoleto since the beginning of the festival and has been cited as one of the major forces behind bringing Spoleto to Charleston in the first place.