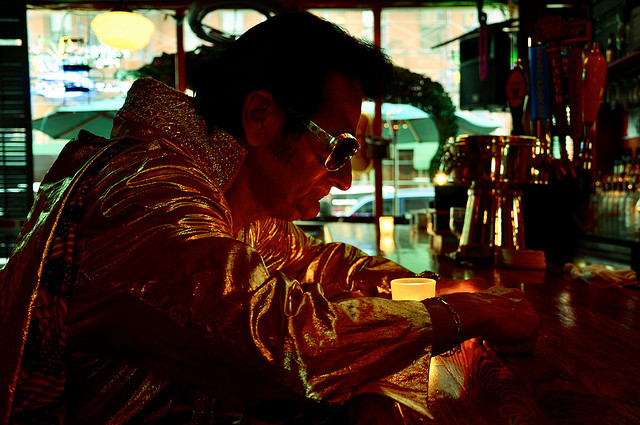 Legends In Concert, will host the 5th Annual Ultimate Elvis Tribute Artist Preliminary Contest on Saturday, June 30, 2012, from 7 to 10 p.m.

Fifteen talented tribute artists from as close as Myrtle Beach and as far as Ohio will compete on the Legends in Concert stage for a chance to compete in the Ultimate Elvis Tribute Artist Contest finals in Memphis, Tenn., held this August during Elvis Week. Each will have the chance to sing one song that impresses the judges with their tributes to the King of Rock ‘n Roll. The first place winner will receive $1,000; second place, $300; and third place, $200.

Diane DeVaughn Stokes, host of “Diane at SIX!” on EASY Radio and HTC’s “Inside Out” returns as the contest’s emcee. Radio personalities Banana Jack Murphy and Lou Krieger, as well as Janice Duffy from Hard Rock Cafe, will serve as the contest’s judges. The event will also feature a special guest appearance by Legends veteran Elvis Tribute Artist, Grahame Patrick, who will be performing at Legends In Concert® Myrtle Beach at the time of the contest.

“We are extremely honored to be hosting such a highly-regarded contest and collaborating with Elvis Presley Enterprises for the fifth straight year,” said Jason Aiesi, general manager of Legends in Concert Myrtle Beach. “The contest is always an unforgettable experience for Elvis fans of all ages!”

Ticket prices will range from $37.95 to $47.95 per ticket and can be purchased by calling 800-960-7469 or by visiting legendsinconcert.com. A two-show combo package for both the Ultimate Elvis Tribute Artist Preliminary Contest and the Legends In Concert show is available, saving guests $10 per ticket when they purchase both shows at the same time.

For more information about the 5th Annual Ultimate Elvis Tribute Artist Preliminary Contest or Legends In Concert, head over to legendsinconcert.com.