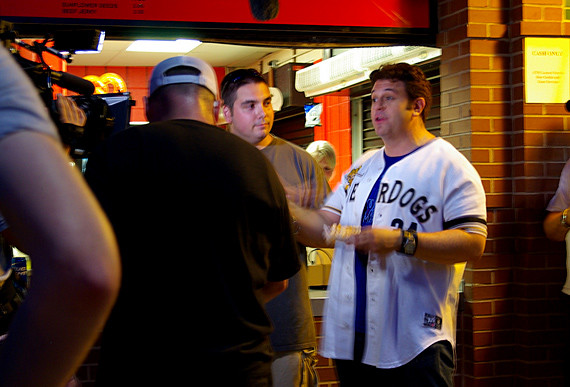 Image by Amanda Click/TheDigitelImage by 20090527-richman.jpg Adam Richman, host of Man vs. Food with a RiverDogs fan being filmed for an upcoming episode.

Despite some shaky pitching the first three innings, the Charleston RiverDogs held out and defeated the Bowling Green Hot Rods 9-4, and Travel Channel's Man vs. Food filmed an episode for the show's upcoming season last night, May 26.

Read more stories on this subject in our RiverDogs topic page.The score stayed close at 5-3 in favor of the RiverDogs until the sixth inning, when the Dogs brought in four runs. The Hot Rods responded with only a single run in the top of the seventh. The win keeps the RiverDogs in first place with a 25-20 record.

The win was not the only exciting aspect of the nights trip to The Joe. The television series Man vs. Food, with host Adam Richman, filmed an episode featuring the "Homewrecker" hot dog -- a monster of a dog featuring up to 22 toppings. The crew travelled around the concession stands during the game, talking to fans and trying out other concessions that the The Joe has to offer.

The episode of Man vs. Food is scheduled to air during the first five episodes of the new season which begins in August 2009.

Update May 27, evening: It looks Richman will also be at a couple other local venues in the coming days.