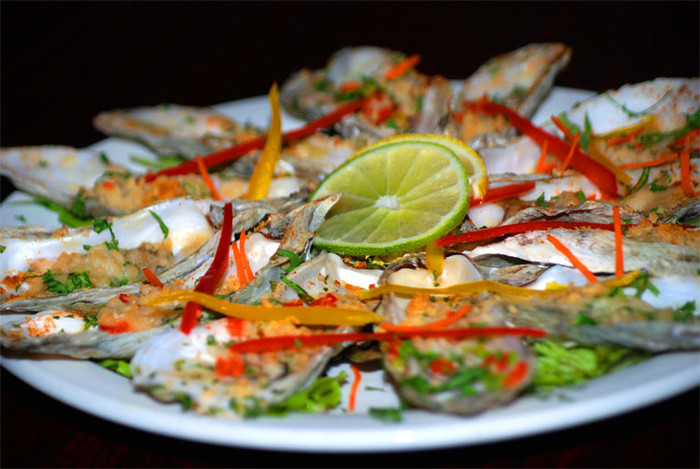 4:14 am on Saturday November 14, 2009 | Posted by
Alluette's Jazz Cafe serves a soul and food revolution

We couldn't have picked a better night to pay our first visit to Alluette's Jazz Café. It was a Sunday, and the first ever open mic at Alluette's was being held.

We've been to open mics in Charleston before, but none quite like this. A Yoruba anthropologist named Dr. O was the emcee.

"There's a train coming," Dr. O told us. "And the name of the train is the freedom train. And it's leaving - whether or not you hop on board."

If there was a moment when the crowd's spirit began to dwindle, Dr. O shook his maraca to energize us. If there was someone in the audience who wasn't performing, Dr. O talked to them on stage, so no one went unknown. He led us in song, and at one point, conducted us sing, "One step closer to my dreams!"

But the open mic wasn't special just because of the good doctor. All the performances at Alluette's Jazz Café were of the highest caliber. There were slam poets, an electronic flutist, and songs about being a father. For the finale, an ex-Drifter in the audience ran home to grab his guitar so he could do a quadruple encore of Bill Withers, Ben E. King, and Ray Charles covers.

The people at Alluette's Jazz Café represented all ages and ethnicities. And that's in part what made the night so special: that people from different backgrounds could come together to share - through passion, through art, through talent - their desire for one thing: freedom. Freedom from their bosses, freedom from their minds; freedom from bigots and backaches, educational institutions and pharmaceutical companies.

In a town that still remains socially segregated, a major draw of Alluette's Jazz Café the sense diversity it promotes.

It was the diversity at the open mic night that reminded us of our humanity. That though it's easy to feel different from others because of what we've experienced, or the way we look, people really aren't different from one another at all.

We have to eat and we have to sleep. We have children and fathers and mothers. We search to discover who we really are, and sometimes lose faith in what we're doing. But most importantly, as humans, the problems we feel are felt by the whole of society.

And that's why it's important to have places like Alluette's Jazz Café.

Dr. O spoke about revolution. And Alluette's Jazz Café is about revolution, but revolution of a different kind - the slow kind. As a campaigner for Slow Food USA, both of Alluette Jones's restaurants are examples in Charleston of the changes taking place in the food industry. All the vegetables she serves are local and organic. The meat is antibiotic and hormone-free.

Like her other restaurant, Alluette's on 80 Reid Street, Alluette's Jazz Café specializes in holistic soul food. The menus at the two spots are similar, serving salads, sandwiches and entrées of meat and veggies. But what separates Alluette's Jazz Café from her restaurant on 80 Reid (besides that it's open until 2 a.m.) is the downtown music culture it's preserving. Currently, the jazz café hosts live music six days a week.

However, to enjoy a meal at Alluette's Jazz Café, one must be willing to take things slowly. There are no waiters trying to turn over tables and send you flying out the door. In fact, if not absorbed in the music or the company you're keeping, you may find yourself wondering, "Where the hell are my collard greens?"

Like the old saying goes, all good things take time. Dining at Alluette's is a reminder that eating should be a process to enjoy, not a race to fill our bellies.

But because of the standards they place on meat and produce, food at Alluette's Jazz Café isn't cheap, and the portions aren't gut busting. We ordered three things from the menu that night: the house salad ($8), the spinach artichoke dip ($10), and a special order of fried shrimp with French fries ($16 at her other location) and it fed one person only.

The food glistened, though. It was fresh, flavorful, colorful and healthy. The house salad came with tomatoes, slivered Vidalia onions, a homemade vinaigrette dressing, and sautéed squash and zucchini over a bed of mixed greens. The spinach artichoke dip ($10) was tangy and smooth, but not too creamy. The hand-cut french fries still had their skin still on, and the shrimps were cooked so lightly, in the batter you could see sprigs of rosemary.

But like we said before, eating at Alluette's Jazz Café isn't inexpensive. And this perhaps is the one drawback that prevents the jazz café from being a regular dining haunt for people on a budget, rather than a place for special occasions only. The restaurant does, however, serve lunch. All sandwiches and salads on the menu are $10 and under.

Also, to enjoy music at Alluette's Jazz Cafe, one doesn't have to eat there. Just order a drink. There's a full liquor bar, and PBR is $2, low enough for an affordable evening.

But moreover, based on the performers we watched at open mic night, we believe Alluette's Jazz Café has the power to become the type of place Charleston has always needed; somewhere where people tired of binge drinking up and down King Street can go to listen to blues and jazz in an intimate setting; a go-to spot for sharp minds and open hearts to congregate.

ENJOY THE NEXT OPEN MIC NIGHT WITH DR. O AT ALLUETTE'S JAZZ CAFÉ NOV. 22 AT 137 CALHOUN STREET IN DOWNTOWN CHARLESTON.