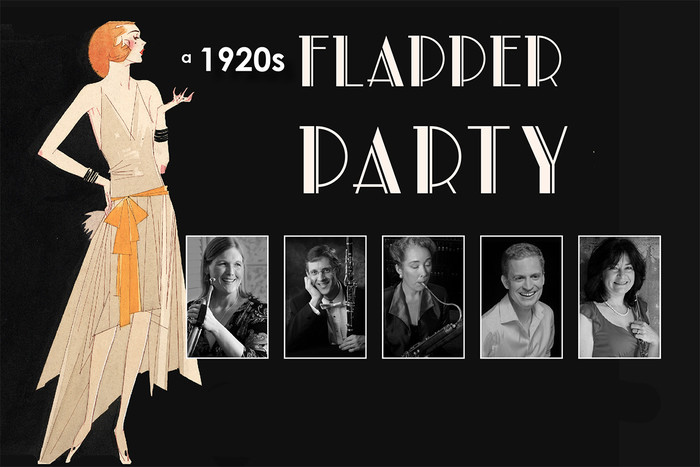 Chamber Music Charleston returns to Memminger Auditorium (56 Beaufain Street) for the grand finale performance of their Ovation Concert Series on Saturday, April 19 at 7:30pm.  The evening will capture the spirit of a 1920s Flapper Party, with ladies encouraged to don their don their best flapper dress and gents to sport their smartest tux and fedora.

Guest pianist Andrew Armstrong will join musicians of Chamber Music Charleston in a program of music for piano and winds by Gershwin, Poulenc and Mozart.

“We wanted to capture the spirit of an evening in the 1920s, when music, art and fashion was evolving into new forms,” explains Chamber Music Charleston director Sandra Nikolajevs.  “Jazz music was exploding onto the music scene and old traditions in music were being traded in for new, modern styles.”

The concert opens with music by the traditional classical composer Mozart, as a nod to the past.  The program continues with music of Gershwin and Poulenc.

Of all the 20th Century American Composer, George Gershwin was perhaps the most successful at bringing jazz music to the classical concert hall.  His Three Preludes in 1926 for solo piano is such a work that blurs the line between classical and jazz.  The preludes were later transcribed for clarinet and piano and will feature Chamber Music Charleston clarinetist Charles Messersmith with pianist Andrew Armstrong.

The program continues with Francis Poulenc’s Sextet for Piano and Winds and Mozart’s Quintet for Piano and Winds with Regina Helcher Yost (flute), Briana Leahman (oboe), Sandra Nikolajevs (bassoon) and Debra Sherrill Ward (horn) joining Mr. Messersmtih and Mr. Armstrong on stage. Poulenc created music that was whimsical and quirky, using the classical instruments in a new, modern way.  The instrumentalists are called upon to play extremely expressively in one turn, and with great virtuosity in the next.

The Ovation Concerts have become a highlight of the concert season with special guest artists, exceptional chamber music and the transformation of the concert area into an exciting venue with wine, food and stunning décor.  The 2014-2015 Ovation Concert Series has been announced and tickets will be available for sale at the April 19th performance.

Tickets for the 1920s Flapper Party are $25 for theater seating and $40 for table seating (table seating includes complimentary wine).  Tickets can be purchased by calling 843-763-4941, online at chambermusiccharleston.org or at the venue 45 minutes prior to the performance.

Head to the source at chambermusiccharleston.org