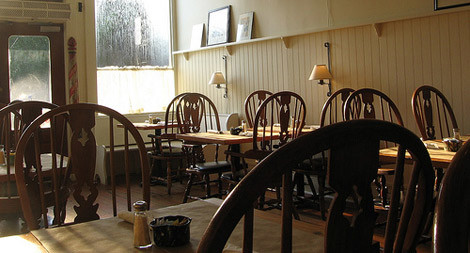 Image by flickr user Ned RaggettImage by 20080709hominy.jpg Hominy Grill might have been the first restaurant to take a chance on the upper peninsula, but it certainly hasn't been the last.

Elliottborough, once just a collection of abandoned buildings and streets you wouldn't walk alone on after 10 p.m. (well, there are still a few ...), is becoming the place to be for restaurants. With the influx of college kids in recent years along Cannon, Spring, Bogard, etc., food establishments have a ready and willing clientele, and even people who don't live there are starting to aim a little farther north than usual when deciding where to eat.

The Charleston Regional Business Journal does a write-up on the trend, and the real story here is how much the area has developed over the past decade. While they never use the G-word (you know, starts with "g," ends with "entrification"), it's pretty clear to anyone who's been watching the area what's happening. And for those looking for good food, it's not a bad thing, because it means restaurants that could never afford to open farther south on the peninsula have a chance.

From the Business Journal:

(Charleston planning division director Christopher) Morgan indicated that the restaurant fever gripping the Elliottborough neighborhood is part of a larger story of redevelopment on the upper peninsula and in Charleston’s Neck area. Granville’s Cafe and Catering on upper Rutledge Avenue and Santi’s Mexican restaurant on Morrison Drive have set stakes farther uptown.

“The big picture is, the whole upper area of the peninsula is seeing new development and livability,” Morgan said. “The whole upper peninsula, once you get north of Calhoun Street, had been underserved with restaurants and retail. You’ve got a lot of renovation activity going on now and new people moving in, so there is a growing market for restaurants and retail. I think because there is renewed interest in those neighborhoods, that has added to the attraction for restaurateurs.”

A couple of the big projects that the story points out in drawing new residents to the area are Morris Square and the Midtown development. And the effects of this go beyond drawing new people to the area. You have the city doing landscaping, fixing streets, making it feel like a neighborhood. And you have people not afraid to be out on the street at night, as the Business Journal continues:

“It’s kind of been a 180-degree change over the past five years,” (Five Loaves Cafe's Casey) Glowacki said. “Every month is better than the last month. Sales are going up. The neighborhood is great.”

“After dark, it was kind of scary. Now, my dinner business is actually neck-and-neck with, if not better than, my lunch business,” Glowacki said.

Hominy Grill was probably the first in the neighborhood, opening about a decade ago, while a couple of newcomers include Fuel, located in an old gas station on Cannon, and Lana Restaurant and Bar. Both are located right across the street from Hominy Grill. A little farther north, at St. Philip and Bogard, you'll find D'Allesandro's, one of the more popular pizza places to open in recent years. And there's also the ever-just-around-the-corner Trattoria Lucca a neighborhood style Italian restaurant.