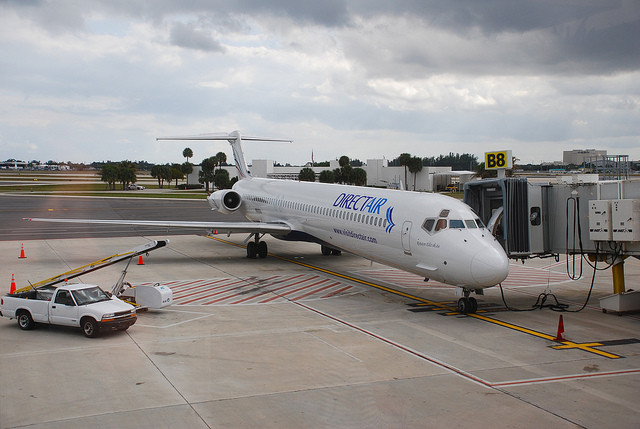 Update March 16, 2012: As far we can tell, WMBF was the first local outlet to break the news that Direct Air has indeed filed for bankruptcy.

Better yet, their write-up has links to official statements from Direct Air, the Department of Transportation, and court filing documents. Check it out here. Well done!

Update March 14, 2012: The Direct Air saga blew up yesterday, March 13 and media outlets here in Myrtle Beach and nationally are talking about it.

Below in our 11:40 p.m. update we have a statement by Myrtle Beach Chamber of Commerce President Brad Dean, however; later in the day yesterday Dean released an additional statement:

"While the loss of air service is never a good thing, we're encouraged by the fact that it's early in the year, potentially allowing for the current operator to reemerge or another airline to pick up service to some of the dropped routes before the start of the summer travel season. Several of the markets Direct Air has been servicing are also serviced by a competing airline, and we're hopeful that visitors in those destinations will continue to travel to the area on one of the other carriers.

We have worked in partnership with Direct Air to advertise the availability of direct flights to the Myrtle Beach area in the past, but have a strategic and flexible marketing plan that allows us to adapt messaging quickly. We plan to maintain our advertising presence and continue to highlight the Myrtle Beach area as a family-friendly, affordable destination in all current markets with direct service but without specific mention of Direct Air's service.﻿

Through our collaboration with the airport and Myrtle Beach Golf Holiday, the Myrtle Beach Area Chamber of Commerce/CVB is continually committed to growing air service to the destination knowing it's a crucial element of increasing first time visitation. We remain hopeful that an airline may resurface in the future that will provide our visitors with additional affordable, direct flights, but for the moment, we're focused on making sure that those visitors affected by a Direct Air suspended flight receive the attention they deserve and assistance they need with their immediate travel plans."﻿

And finally, something pretty interesting that happened back in October of last year in Buffalo, New York. The video directly below is from NBC affiliate WGRZ, from their piece titled, "Passengers On "Nightmare" Flight Speak Out﻿"

Update 1:45 p.m. Direct Air has issued a press release stating that they will be canceling all flights until May 15, 2012.

Direct Air began flying passengers back in March 2007, and from the reports today it seem like their last flight was yesterday, Monday, March 12.

Direct Air finds it necessary to suspend flight operation from Tuesday, March 13, 2012 until May 15, 2012. This decision was made to address operational matters. We are currently evaluating strategic alternatives for Direct Air.

Direct Air is committed to our passengers, employees, and the communities we serve.

Passengers holding reservations for Direct Air flights departing between Tuesday, March 13, 2012 and Tuesday, May 15, 2012 are directed to contact their credit card company to arrange for a refund.

Yahoo News has a write-up about the announcment where one stranded passenger, Doug Rendleman﻿ said:

"When you fold a business that so many people rely on, you have to help" get them home, he said. "If (a company) went belly up and they told me they can't sell me a couch or something — that's no big deal. But this is a nightmare."﻿

Yahoo went on to ask Rendleman about refunds and said he was told only flight vouchers were available at this time. Read the rest of the Yahoo News piece here.

Direct Air's responce of "contact their credit card company to arrange for a refund" doesn't give credence﻿ to a lot of faith, as most companies would automaticlly issue a refund. ﻿Our source from earlier informs us that Direct Air will indeed file Chapter 11, Bankruptcy protection.

We'll keep you posted on all the latest.

Read the full report over at Myrtle Beach Online.

Brad Dean, President and CEO of the Myrtle Beach Area Chamber of Commerce, offers the following comments in response to a suspension of Direct Air flights:

“Currently, the Myrtle Beach Area Chamber of Commerce staff members are working in support of both in-market visitors trying to get home, and those visitors who were scheduled to fly into the Myrtle Beach area by helping to address their immediate travel needs.

We have informed various local travel agents of Direct Air flight cancelations and suspensions and are working with them to assist any visitor who may have experienced a canceled or suspended flight. We are offering various local travel agents’ contact information to anyone calling our visitors center for assistance, in addition to providing them the contact information of both the airport and Direct Air’s corporate headquarters.

Lastly, the chamber’s Myrtle Beach area welcome kiosk at the airport is also acting as a customer service desk to assist those visitors with either canceled or suspended flights. The MBACC is dedicated to making sure all visitors affected are provided the services they need until their flight issues are resolved, and we’re working with local hotels and businesses to accommodate those in-market visitors to the best of our abilities.”

After reports of canceled flights began to appear last night local media has been all over this story. This morning, we got word from a source close to Direct Air that they are in fact in some serious trouble. Our source tells us that they are going out of business and are having trouble paying off debts.

There has been no official word from Direct Air as to what is going on, but a press conference is scheduled. Just a few days ago on March 5, 2012, Direct Air announced it will be expanding its service to Florida.

Below is a sampling of what people are saying on Twitter.

[View the story "Direct Air....what's going on?" on Storify]