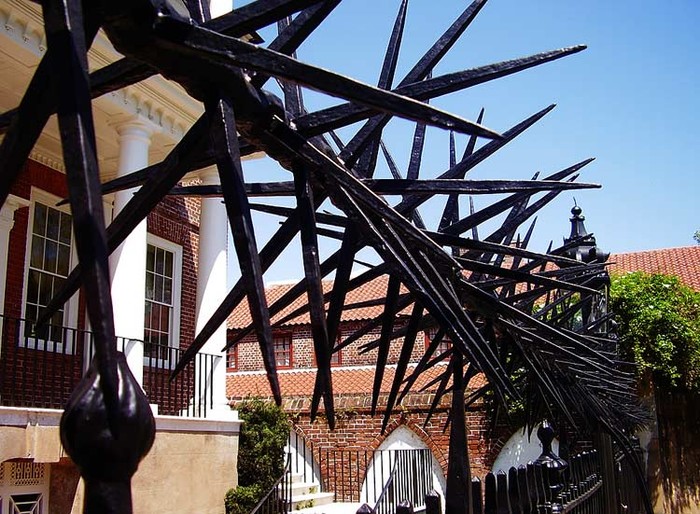 Image by Flickr user ralphbod Image by 20091029-spikes.jpg A sure sign you're in the cultured part of town.

North vs South. It's most commonly associated with the Civil War, but another one wages today: South of Broad's War of the old vs the new.

If you've lived in Charleston for more than a couple years you've probably encountered it. Heck it's an issue that was just raised in a Seattle Times column about Boeing.

The new plant is in North Charleston, not Charleston. Fritz Hollings, the former South Carolina governor and long-serving senator had a saying: "There are two kinds of people in Charleston: Ones who don't wear shoes, and ones who look at you like you don't wear shoes." This is a place of huge income, class and racial disparity.

It's something that's got local writer Dan Conover fed up.

He writes, in part:

Charleston, for all its considerable charms, remains a backward-looking city. Not "backwards," as in unsophisticated or unintelligent, but more enamored of its past than its present. So while the city officially recognizes the value of its "creative cluster," its "tech sector" and its "knowledge-based industries," Charleston's institutions, typically dominated by the same old families and traditions, remain wary -- if not openly hostile -- toward new ideas and new people.

Since that anti-outsider bias tends to limit opportunity, Charleston has developed a reputation as a place where who you know is more important than what you know. It's why so many talented people here seem to direct their energies toward celebrity instead of substance.

His call is simple: Throw off the reins and realize that you don't need the blessings of the old. But it's something easier said than done, and that's why you should go read his argument.

Read it over here.

Two notes: To be sure, Conover talks more about the old parts of Charleston vs Everywhere Else. But at the core here is the mindset that once existed almost entirely south of Broad Street but has since expanded to much of Charleston.

Secondly Dan is a paid contributor to the site, but that's got nothing to do with me plugging this, heck he could have plugged it without any staffer's help.