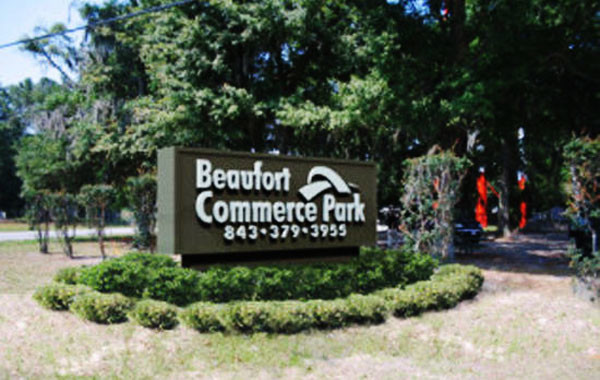 1:18 am on Wednesday March 21, 2012 | Posted by Ken Hawkins
In a twist, City of Beaufort looks to buy ailing Commerce Park

Remember how the government- and private-funded Lowcountry Economic Network collapsed after trying to make a go of a commerce park in Beaufort?

(If you don't, check out our topic page — or just know that the Network had taken an interest-only load whose payment ballooned far more quickly than commerce park tenant payments, and it lead to the Network's financial collapse.)

That land (which the Network owed some $2.6 million on) was sold at auction for $2 million, and now the City of Beaufort is hoping to buy if for even less than that.

While the price may be right (and the city will inherit the improvements the Network paid for), Beaufort will likely have an uphill battle trying to seel the promise of the land in the face of its tax dollar gobbling brand.

Still, the city seems to see the economic development opportunity as well work the risk, writing in a release: "While great progress has been made and more than $500 million spent preserving Beaufort County's open vistas and building new schools, roadways and government buildings, something's still missing – jobs.

Below are oodles more details from the city's new release:

Beaufort City Council moved to address that void Tuesday by broaching the idea of buying the foreclosed Commerce Park and actively marketing it.

The 167-acre Commerce Park is located near Marine Corps Air Station Beaufort. The park was most recently owned by the Lowcountry Economic Network and prior to that it was owned by a group of private investors.

Beaufort has money available in its Land Acquisition Funds that could be used for economic development purposes such as the Commerce Park. Several options, to include financing, are available for the balance, and none of them require a tax increase for city residents, Beaufort Mayor Billy Keyserling said.

Keyserling pitched the Commerce Park purchase to City Council, along with a multi-pronged approach to make it work now and into the future. He pointed to Beaufort's Civic Master Plan process, now in its second year, designed to build a stronger fourth century for the historic city.

In recent months the city has seen increased prospect traffic and is learning from each conversation that Beaufort is ripe for increased business investment.

"What's missing in this area is a strategy for creating more skilled and higher paying jobs for the children who grow up here, for military families who want to stay here upon ending their service to our country, and for others who want to live in Beaufort.

"Work opportunities for our young people should be just as important to us as buying open space for scenic views and mitigating traffic, new street lights in the downtown area, new ways of approaching public safety and beautifying our small but culturally rich and diverse little city," Keyserling said.

"This is not to say these investments are not important -- because they are. But ... this is the right thing to do, at the right time in our City's regrowth and renewal," he said. "This is our next step in City Building. Together, we can make this work. Together, we can help build a better Beaufort, now and for the future."
Part of Beaufort's comprehensive plan includes expanding the city's economic base while growing and grooming its core areas through infill development.

As proposed, the City would buy the Commerce Park from a group of banks that hold ownership following foreclosure. As owners, the City would petition to have the land annexed into Beaufort. Once within the Beaufort city limits, the land would be guided by Beaufort's planning and development ordinances.

One of the City's goals is to have all necessary permitting ready for approval within 30 days of a business submitting a complete application – addressing an oft-voiced complaint about bureaucratic roadblocks to new businesses.

"We – Beaufort and the Commerce Park – are ideally located to tap into the aerospace industry, and we also have one of the most qualified workforces on the planet, matriculating Marines who are highly-trained to work on advanced fighter jets," City Manager Scott Dadson said.

The Commerce Park is off U.S. Highway 21 about 12 miles from U.S. 17. It's been identified as an industrial park or business center for more than 30 years.

Keyserling and the City Council said they encourage the mayors of Port Royal, Bluffton, Hilton Head, Ridgeland and Hardeeville to move forward with revitalizing the Lowcountry Alliance.

"The Alliance is critical since it is the only vehicle through which leads are fed by the Department of Commerce and it is the vehicle, within the Secretary of Commerce's policy, eligible to receive matching dollars for regional economic development," Keyserling noted in a memo to Council.

Related to the Commerce Park purchase is Beaufort's involvement in what's called the Transition Work Force Education Assistance Collaboration, an organization in its infancy that has been meeting with S.C. Department of Commerce, military personnel specialists and academia.

Likely local participants include the Beaufort County School District, the Technical College of the Lowcountry and USCB, which has brought the USC School of Engineering and Computing and the McNair Center for Aerospace to the table. Each of these organization's mission is to train future employees for jobs for which there currently aren't workers with necessary skills.

In Beaufort's three military installations, "we have a huge untapped economic development asset in the disciplined, focused and experienced Marines and sailors who, with appropriate training, could provide a workforce unlike any other," Keyserling said.