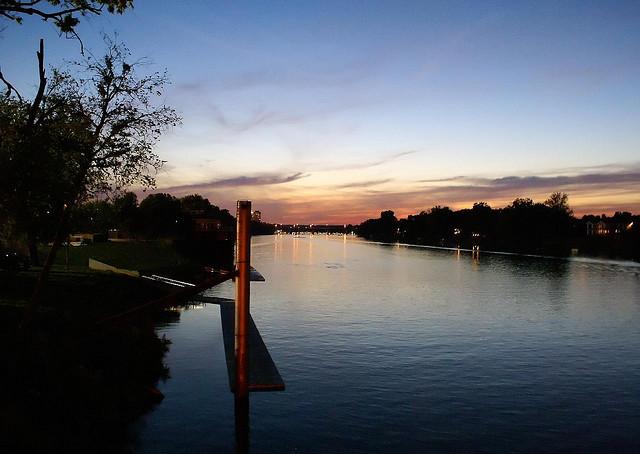 Thanks to a $3 million grant from the National Science Foundation, a river-long series of sensors will be set up to monitor the water quality of the Savannah River.﻿

The network will be set up by Clemson ﻿University.

A battery-operated computer smaller than a Rubik's Cube is at the heart of the endeavor to deploy a network of environmental sensors along the 312-mile Savannah River — from the headwaters in North Carolina to the port in Savannah.

The Beaufot-Jasper Water Authority pulls drinking water from the river, and the river's salt levels have become highlighted in the debate over deepening for the Savannah port.

This network will provide real-time data on water quality and flow rate at a scale that until now was cost-prohibitive. The data is critically needed to improve water resources management as demand increases for drinking water, hydroelectric power, recreation and industrial production.

Below are more details about the project, from a release:

Called a "MoteStack," the technology allows an unprecedented number of sensors to be deployed across a large area and operate as a highly efficient network. The MoteStack is inserted into a buoy system anchored to the river floor. External sensors collect data on water temperature, flow rate, turbidity, oxygen levels and the presence of pollutants.

The MoteStack processes the data and transmits it to Clemson's high-performance computing system. Information is displayed on an interactive website where water resource managers can view multiple data sources and locations at the click of a mouse.

"The Intelligent River seeks to transform the science and business of managing natural resources at the landscape-scale and reflects the worldwide quest for earth-monitoring technologies," said Gene Eidson, director of Clemson's Institute of Applied Ecology.

He initiated the Intelligent River program in 2007 with seed funding of $1.75 million from Clemson Public Service Activities.

"Our goal is to utilize the Intelligent River technologies to safeguard our natural environment, the principal driver in South Carolina's strong tourism, forestry and agricultural economies," he said.

The Intelligent River is a campuswide interdisciplinary research initiative, administered through the Institute of Applied Ecology, that joins the forces of computer and environmental scientists to develop new technologies for linking land use, energy production, climate change and water resources. It also is a key component of the new S.C. Center of Economic Excellence in Sustainable Development that focuses on green job creation around these technologies.

Jason Hallstrom, an associate professor in the School of Computing and a Clemson IDEaS Professor, is the principal investigator for the NSF award.

"We are delighted to receive the support of the National Science Foundation for this important task," Hallstrom said. "Our goal is to develop a cyberinfrastructure-enabled instrument that will serve as a world model for managing water resources. It takes an incredibly talented and dedicated team that spans multiple disciplines to achieve this. We have that team at Clemson."

"This technology has the potential to create a new knowledge-based industry in South Carolina that can bring high-tech jobs and protect the environment," said John Kelly, Clemson vice president for economic development.

In announcing the grant, NSF officials made it clear there is a critical need for this research.

The grant announcement on the NSF website reads: "It is evident that the growing mismatch between water supply and demand impacts us all: USA watersheds are in peril! This project does something about it with support from EPA and USACE (U.S. Army Corps of Engineers). Within the reach of environmental science, this work explores the connections among land use, energy production, climate effects and water resources applying information and computing systems."

"The technologies being developed will enable us to more adaptively manage the river by optimizing water resource allocation while minimizing impacts on the environment," said Col. Edward Kertis, former commander of the U.S. Army Corps of Engineers Savannah District. "We will be able to refine our releases based on changes in water quality, ecosystem functionality, habitat availability and human effects. The new generation of data-collection platforms could potentially be adopted by every Corps of Engineers water-management office across the country."

Thursday's announcement of the grant for Intelligent River followed a report to the board of trustees that Clemson's externally funded research expenditures increased for the fifth consecutive fiscal year, surpassing $100 million for the first time. Sponsored expenditures in 2010-2011 totaled $107.6 million — more than $10 million higher than the previous year.

Vice President for Research Gerald Sonnenfeld told trustees that while new awards to Clemson were $95 million in 2010-11, the expenditures figure shows that research activity is actually increasing.

"Expenditures are the nationally accepted standard for calculating externally-funded research activity in a given year," he said. "Awards are an unreliable measure, because grants can be multi-year, or they can be pass-through funding for research that actually takes place at a partner university. Expenditures give you a much better understanding of actual sponsored research activity during a 12-month period."

The change in the level of new awards stems from a number of factors, including the previous year's record $45 million grant for a wind turbine drive-train testing facility at the Clemson University Restoration Institute, the end of "stimulus" research funding and decreases in the availability of SmartState Centers.