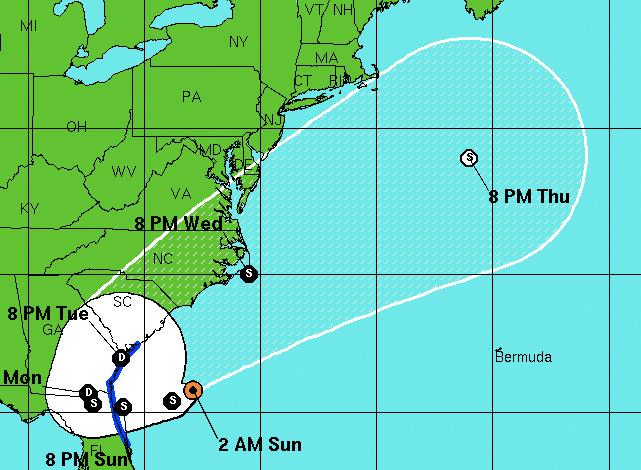 12:38 am on Sunday May 27, 2012 | Posted by Ken Hawkins
Beryl update: Beaufort, Jasper under tropical storm warnings

NOAA
Beryl's forecast as of 2 a.m. on Sunday with max sustained winds of 50 mph.

Update: Get the update here.

Subtropical Storm Beryl continues to drift southwest towards making landfall near Jacksonville, Florida, however Lowcountry residents should get ready for rain and high winds, particularly if the storm drifts more westward.

Reinforcing this, the National Weather Service has placed Beaufort and Jasper counties under a tropical storm warning.

Beryl is expected to make landfall in the early morning hours on Monday, and the Lowcountry currently is being given a 40% chance of bringing tropical storm-force winds throughout the Charleston area.

The storm also presents a double chance for rainfall as it is expected for it to turn north:

Beryl is moving southwestward as a strong ridge develops to its northwest over the Eastern United States. The models forecast this ridge to move eastward during the next 36 hours and then weaken it as a large deep-layer trough moves eastward from the central United States. This evolution should cause Beryl to turn westward and make landfall in the southeastern United States between 24-36 hours. After that time the track guidance agrees that the cyclone will stall and then turn northeastward.

With a good chance of high winds and this being the second storm to approach the Carolina coast even before the start of the hurricane season, residents are well advised to begin prepping their homes, hurricane supplies, and evacuation plans.

Beach goers should also be cautious of rip currents and erosion.

Below is more important tropical weather advisory information from the National Weather Service:

As the storm gets closer today winds will increase especially across the warning area. Winds or wind gusts of tropical storm strength should begin in the waters 20 to 60 nautical miles off the Georgia coast and the waters near off the South Carolina coast around daybreak and then spread southwestward reaching the warned areas from Edisto Beach south to the Altamaha Sound by early to mid afternoon. At this time only minor wind impacts are expected with some downed trees or tree limbs and isolated power outages possible during the height of the storm especially south of the Savannah River. Widespread wind damage is not anticipated at this time.

There is a high risk of rip currents at area beaches through tonight. Beach erosion is likely with the most significant erosion occurring around high tide south of Savannah.

The inland flooding threat is low through tonight. However due to the expected slow track of Beryl or its remnants after landfall an extended period of rain is possible from tonight through Tuesday night throughout southeast South Carolina and southeast Georgia. Even though significant rainfall amounts through tuesday night are looking more likely widespread flooding is not expected at this time due to the dry conditions that currently exist in the area.