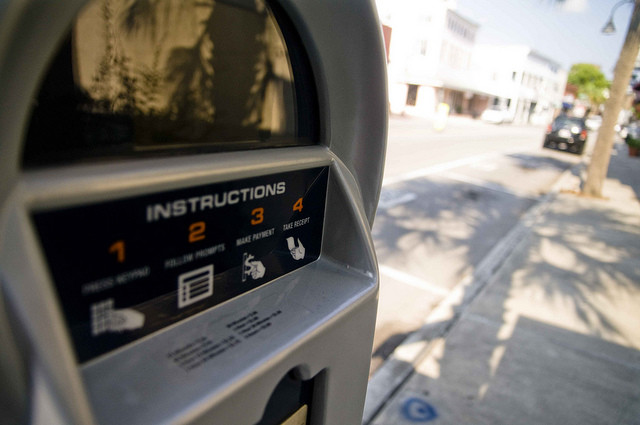 12:03 pm on Wednesday December 8, 2010 | Posted by Ken Hawkins
The inside story on downtown Beaufort's parking debate

Following up on today's earlier story on continued parking drama in downtown Beaufort and whether or not the meters should be uprooted, a reader pointed out an archive document about the debate.

The notes are from a Beaufort City Council work session on November 16 between the mayor, council, Main Street Beaufort, Lanier Parking, among others.

I've pasted the pertinent portion of the document below. It's not the most exciting of a read, but it's excellent background on the inner workings of the debate and, to an extent, how that debate is largely based the opinions of various members.

It's important to note that these comments are prior to Lanier's recommendation of removing the parking Kiosks.

Mayor Keyserling said there are many parking-related issues to discuss, i.e., parking on the Point and the layered structure of authority. Mr. Pinkerton said they have been focused on and going after the problems that have been expressed to various sources. As far as he can tell,

City Council work session November 16, 2010 Page 2they’re all being addressed. As long as the kiosks are there, there will always be some unhappy people.

Lanelle Fabian and Randall Burch of Main Street Beaufort came to the table. Mayor Keyserling said they got off to a bad start with parking for a variety of reasons, i.e., starting in July, signs in the historic district, insufficient buy-in from the merchants, and marketing that wasn’t as good as it could have been. Kiosks had problems that involved longer waiting. From Mayor Keyserling’s point of view, people are furious with him. They need to figure out how to smooth out the edges and stick with it at least until the end of the year. If they replaced the meters tomorrow at $1 an hour and the $10 fine, they would have the same level of discontent they have today. People are learning to use the kiosks and there are some advantages.

There was some discussion of the need for different time durations for meters. Mayor Keyserling said it was a mistake not to accept that aspect of the recommendation, and they should go back and look at it. Mr. Dadson said the parking subcommittee is looking into that. He said council had wanted to go with the simplest method and tweak it as they went. During the holiday bagging of meters, there will be a lull time, and they will be able to think about it and figure out what to do next.

Councilman Sutton said they can talk for 12 hours about parking, and it would be the same thinking every time. He recalled “a layered level for parking times” in the original discussions. The program offered 4-hour parking on Bay Street, and it’s not been gone back to. Merchants have asked for extended time on Bay Street, at least in a certain area. He has a problem with the amount of time available on Bay Street and in the library lot. He said now people will park on Craven, but if it’s a 2-hour limit, what’s the use? If there are too many layers to solve the problem, he wants an agreement on whether the hours on Bay Street should be extended. Mr. Pinkerton said he doesn’t know what the merchants want, and he assumes there are a variety of opinions.

A member of the public said she feels that sometimes this is discussed to death. She feels they need to look at the overall picture. Mayor Keyserling said a commitment was made to the employees on Bay Street, and a certain rate at the private lot was promised to them. Councilman Sutton said that was a private lease, but no rate was promised. Mayor Keyserling said they advertised an employee rate, but now the rate has been raised.

Nan Sutton said there was a meeting of Bay Street merchants, and the overall feeling is that they want more than two hours, at least 3 hours. Ms. Fabian said the elimination of time limits was in the original proposal for parking. Mayor Keyserling asked Alice Wallace of Lanier what the elimination of hours would do. Ms. Wallace said it would have a big effect on turnover.

Mr. Burch said the assumption that they have eliminated employee parking on Bay Street is incorrect. If they come in at 4:00, they pay for 2 hours, and are good. Some have figured out that it makes more sense to park in the lot, but they have not changed the everyday employee coming down and paying for 2 hours at 4:00 pm. Mr. Dadson said the problem with just dealing with time is that they haven’t dealt with the end time for the hours of enforcement. A lot of business is being generated after 5 pm. There needs to be an economic incentive added in. Mayor Keyserling said he’s certainly for that.

Councilman Sutton said Lanier was hired as experienced professionals, but he doesn’t sense they have been doing work anywhere else in the country. He doesn’t feel the city has received any recommendations or advice, or if they have, the city hasn't followed what they were told. He doesn’t have confidence in Lanier “to do the hard work.” Ms. Wallace said Lanier has had over 68,000 transactions at the pay stations, which means they are working. Councilman Sutton said he’s happy about that but not about the complaints.

Ms. Fabian went on to say that merchants disagree, too; they have their own ideas and their customers tell them different things. She is confused about what Main Street Beaufort’s role is. Councilman Sutton said Main Street Beaufort has been put in a bad position; they have been the voice of the merchants downtown, in his opinion. Mayor Keyserling said Lanier “should know who their boss is.” Ms. Wallace said everybody is, at this point. Basically, they make a change, and another group doesn't like it, and then they change it again for that group. They would like to get direction. Mayor Keyserling said they need it from one voice.

Mr. Burch described what had happened re: the plethora of signs and times at the kiosks; he had asked Lanier to do things in that regard but didn’t know of anyone else changing it. Main Street Beaufort didn’t choose the kiosks. Had he known that Main Street Beaufort was in charge of picking the kiosks, he would have wanted to touch them first.

Sue Palmer said they weren’t aware of any problems being solved and didn’t know where to complain. Mr. Burch said the e-mails aren't going into a drawer. There’s a tally sheet about the complaints being made about specific problems, and their priority and the way of solving them is being recorded. Mayor Keyserling said Main Street Beaufort has created an information database. Councilman Sutton said some issues have been dealt with, i.e., signs on the kiosks, labels for the receipts, being able to go into any kiosk to add time, etc.

Councilman Sutton said he doesn't understand why Beaufortonians are different than others served by Lanier, a professional parking group that has served other cities. Ms. Fabian said Main Street picked pay-and-go and the colors of the kiosks. Brent Phillips of Lanier said the problem of being able to see the kiosks does seem to be unique to Beaufort. Councilman Sutton said he’d like to see a report on where Lanier has kiosks because he feels that they were “ill- prepared to be used.” Ms. Wallace reported three other places that have the same machines. Pete Palmer said there needs to be someone who’s clearly in charge who can clearly communicate to the public.

Mayor Keyserling said there are too many players, and they should unburden the Redevelopment Commission from a duty that shouldn’t have been theirs to begin with. Mr. Pinkerton said they need a single person in charge. Mayor Keyserling said ultimately it should come back to council. At the same time, Main Street Beaufort is the logical marketing arm to sell it. Mr. Dadson said the city attorney is reviewing the agreements between the groups. Lanier is the enforcement and ambassador arm and operates in that capacity, and that will not change. Council already has budgetary control. They will have an acting report and a management and complaint report. All the information is there and will continue to be. There has always been downtown parking for 2 hours; those problems have existed for years. Councilman McFee said there was no incentive not to, before.

Councilman Sutton said a problem is the marketing back to the merchants and the consumers. Mr. Dadson said they have had communications with the press; Main Street Beaufort communicates with its members via the web site. Mr. Dadson said some complaints can’t be dealt with – i.e., those who don’t like the rate, etc. – as opposed to not being able to read the kiosk. He said Lanier lets people go without a ticket 47% of the time if they come in to talk about it.

Mr. Burch said there needs to be an understanding of what marketing is. Main Street Beaufort assumed it was to market regionally and locally; they didn’t sign up to market it to merchants downtown. Mayor Keyserling said that Main Street Beaufort is earning its 15% to make the system work via marketing. It was meant to be sold downtown. Mr. Burch said the contract says nothing about selling it to employees, etc. Councilman Sutton said Main Street Beaufort marketing parking is more apropos for them to be doing than the shrimp festival is. Ms. Fabian said the membership is the highest it has ever been. Of 138 businesses on the issue, “x” amount of them think this and “y” amount think that, and she feels the information should be given to council.

Mayor Keyserling asked council to digest what they are talking about and come up with a recommendation. Ms. Fabian said there’s a parking subcommittee meeting soon. Mr. Dadson said if Main Street Beaufort is the sounding board for this matter, Ms. Fabian and Mr. Burch can only put on the table what their board allows them to. Councilman Sutton said the information is coming from the board and the membership, not the full voice of downtown. If this is a board decision, that’s one thing, but if there’s data, he wants to hear it, not just their recommendations.

Ms. Sutton said she was on the board of directors for 7 years and that’s the problem: the merchants are sometimes apathetic “and so divided.” She thinks the most effective way is a door-to-door survey for all the businesses, and there will be a difference in that and what the board of directors says. The merchants as a whole “are a very tough group.” She thinks to get the correct information to council, the survey Ms. Fabian suggested is the best way. Mr. Burch asked if they want a broad perspective, or just Bay Street’s. The merchants association is rolled up into Main Street Beaufort.