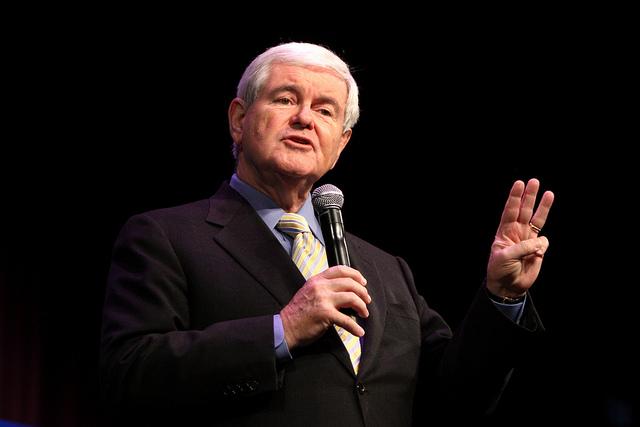 Update January 21: In the final hours leading up to today's primary in South Carolina, Newt Gingrich has pulled far ahead.

That's in spite of the harsh statements made by Gingrich's ex-wife and probably in part thanks to Gingrich's harsh attacks and stance at the North Charleston debate.

It's been quite a reversal for Romeny who was leading with 40% just a few days ago.

“Newt Gingrich looks like the clear favorite now in tomorrow’s primary,” said Dean Debnam, President of Public Policy Polling. “There was a thought that his ex-wife’s interview could stop his momentum in South Carolina, but instead it seems to have reinforced his support. He’s winning with all the key groups that determine the winners and losers in Palmetto state GOP politics.”

Gingrich is leading with pretty much every key segment of the Republican electorate. He's up 41-21 on Romney and Santorum with Evangelicals, he has a 52-18 advantage on Romney with Tea Partiers, he leads Santorum 44-21 with 'very conservative' voters with Romney at 20%, and he's up 39-26 with men.﻿﻿

The skepticism of Republican voters toward the media is helping Gingrich as well. Just 14% of likely voters have a generally favorable opinion of the media, while 77% view it negatively. Gingrich's attacks on the media have clearly played well with the party base.﻿

And questions including Stephen Colbert showed him at 8% support, if he were on the ballot.

Check out the full results over here, and expect fresh numbers in the morning as we head into Saturday's primary.

Update January 19: With the Saturday primary all but upon us, CNN, Time, and ORC International have conducted another poll.

That's pretty close to what we saw in the previous poll.

Now the question is, how much sway can the candidates squeeze out of tonight's debate in Charleston?

Update January 18: Things are getting better for Mitt Romney, but Newt Gingrich is remaining a strong second.

Romney has moved up from 29% last week to 35% support from likely S.C. voters. Meanwhile, Gingrich slid from 24% to 21% in a poll by Rasmussen Reports.﻿

Rick Santorum and Ron Paul﻿ are tied at 16% and Rick Perry is pulling 5%.

However, the polling was done on January 16 ahead of the night's debate in Myrtle Beach where Gingrich received ﻿﻿much applause.

So, Romney hasn't won it yet, but things are looking ever better for the would-be GOP nominee — that's assuming that the new Herman Cain (aka the political candidate formerly know as Stephen Colbert) doesn't come surging. We're kidding, we hope.

On a poll done by Public Policy Polling from January 11 to 13, they found that, "Mitt Romney continues to hold a modest lead in South Carolina's Republican primary for President.  He's at 29% to 24% for Newt Gingrich, 15% for Ron Paul, 14% for Rick Santorum, 6% for Rick Perry, 5% for Jon Huntsman, and 1% for Buddy Roemer.﻿"

Romney has remained on top, however Santorum has slid to fourth while Paul ﻿moved into third.

Meanwhile Huntsman is expected to call it quits today and back Romney.

Also churning in the South Carolina political waters is TV news comedian and pundit Stephen Colbert﻿ is increasing his showing in South Carolina — Public Policy Polling found that if he had been listed on the ballot, 5% said they would have voted for him — and Colbert's former PAC has released a humorous TV ad attacking Romney as a serial killer of businesses.

Also, if you haven't yet registered to vote for the primary, it's too late to do so now — but if you only need to know where to vote on the 21st, head here.

Stay tuned to our politics page for the latest info and news.