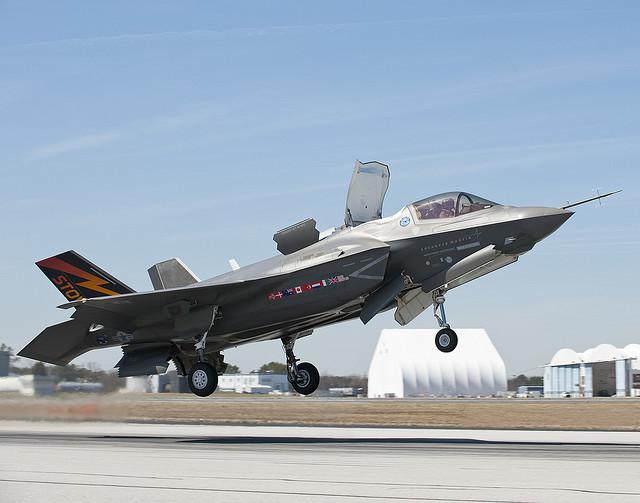 Lockheed Martin
The F-35B does a short takeoff test.

Updated Dec. 8: Just days ahead of an expected final announcement regarding the future deployment of the F-35B a group of Beaufort area residents questioning whether the F-35 is indeed best for Beaufort has gotten a little more press.

The Associated Press has this report, which not too much unlike Sanford's letter, is likely a day late and a dollar short.

Updated Dec. 6: With the final decision on the basing of East Coast F-35B squadrons to come down this Thursday the Island Packet had a weekend editorial on how the Gov.'s letter calling for a test flight over Beaufort was in fact "a day late and a dollar short."

You can read the full Packet editorial here.

What the editorial writer fails to elude to, though the point is made by an astute reader in the comments at the bottom, is that Sanford likely new exactly what he was doing by sending his letter after the EIS public comment period had closed and only days before the final decision is to come down.

The Pentagon's decision on how many squadrons MCAS Beaufort is to receive will be recorded in the federal registry this Thursday.

Updated Dec. 2: Looks like Gov. Mark Sanford has made 180 new friends in the form of the Best 4 Beaufort group which opposes the F-35B plan for MCAS Beaufort. The Island Packet has a story on how the B4B group is happy with Sanford's letter.

What's funny is the same day this story runs the Beaufort Chamber runs a full-page ad with more than 300 names of residents who support the F-35B plan and MCAS Beaufort.

So is Sanford serving his constituency or protecting his property value?

Reported Dec. 1: Shockwaves rippled through the Beaufort in-the-know community on Monday when Gov. Mark Sanford's letter of non-absolute support for the F-35B in Beaufort made the rounds.

In his letter to Defense Secretary Robert Gates, Sanford explains the great disparity in facts being circulated by supporter and detractors of bring the F-35Bs to the Marine Corps Air Station Beaufort.

Sanford states, "So, long story short, I am left with a fair degree of confusion on who is right."

And so he's asking the defense secretary to, "send one of the test aircraft to Beaufort for several days of demonstration flights."

A perhaps surprisingly obvious solution to all the public back and forth.

But Sanford also knows he's walking into the midst of dogfight, "I'd like to avoid unnecessary controversy as we wrap up this administration. Suggesting anything but support for F-35B's coming to MCAS Beaufort would be viewed as controversial. Despite this reticence I'm compelled to write because before one makes any major decision, one should get all the facts."

But that risk may be well founded as a November 22 letter from the EPA about the F-35B addresses the plane's noise issues amongst other unresolved environmental concerns, the agency writes:

"The Final Environmental Impact Statement does not discuss any differences between the F-35A and the F- 35B potentially affecting the noise study's accuracy in defining noise impacts, for example the F-35B is 6% heavier than the F-35A. Another example, the F-35B's STOVAL feature requires a second engine to lift the plane vertically. The noise associated with this feature has not been discussed."

But a caveat not fully explored in Sanford's letter is how his family owns some 1,500 acres of Coosaw Plantation land that is across the Whale Branch and well under the base's noise pattern (map below,) for comparison consider that the land is closer in distance than Habersham is to the base, and louder jets would certainly hamper any possible development plans.

You can see Sanford's full letter here, and the full text of it is pasted below.

For additional reporting on this, The Island Packet also has a report that has some speculation on the likelihood of a test flight actually happening early next year.

Keep up on the F-35B debate on our topic page.

Description related to F-35B test flights to Beaufort contain this page and it's very interesting for me to know the great features of that plan and it show that our defense is very strong which is possible with the hard work of Air force which made such great plan for defense. Actually, I visit this site and hire best essay writer UK and unfortunately this website don't have any source which help me to do it.