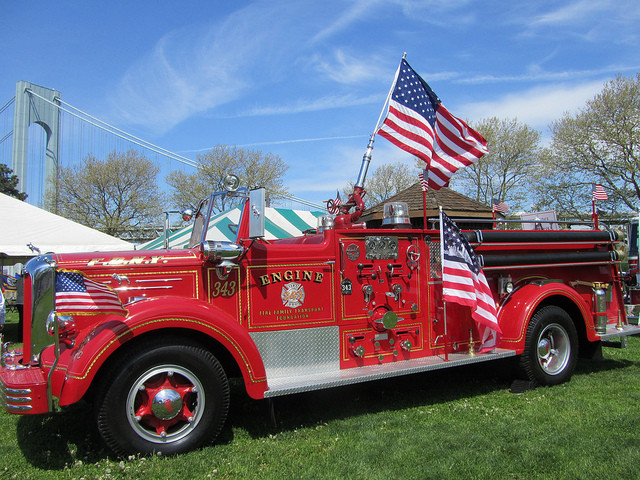 4:07 am on Wednesday September 14, 2011 | Posted by Deb Welch
Fire Engine 343 coming to Beaufort with steel from World Trade Center

On September 15, FDNY Engine 343 will travel from New York City to Beaufort carrying a special relic: a four foot piece of steel that was part of the superstructure of the World Trade Center prior to the attacks on 9-11.

This section of steel beam will be received by the Parris Island Historical and Museum Society after it makes a stopover for the Lt. Dan Weekend.

Fire Engine 343 was named in honor of 343 NYFD firefighters who lost their lives on 9-11 when the World Trade Center collapsed.

Captain Andrew T. Woodall and Fire Engine 343 will arrive in the South Carolina Lowcountry on the afternoon of September 15th. His first stop is Palm Key in Ridgeland, SC where wounded veterans from the wars in Iraq and Afghanistan are attending the Lt. Dan Weekend retreat. At 6:00 PM, Captain Woodall will maneuver Fire Engine 343 and the steel relic to the Conflict Zone Exhibition at Beaufort's City Hall on 1911 Boundary Street. For more details about Captain Andrew T. Woodall and Fire Engine 343, see Dave Lauderdale's article in The Island Packet on the 10th anniversary of 9-11.

There, the general public and those attending the free movie "Lt. Dan Band: For the Common Good" can see the fire engine and steel WTC beam. Andrew T. Woodall, a retired fire captain from Raleigh, N.C., served as liaison to the NYFD after 9-11 and assisted families of firefighters killed at the World Trade Center. During his tenure as Chief of Operations, firefighters of NC collected over $7,500,000 for the families of 9-11. More recently, Captain Woodall founded Fire Fighters Assisting Armed Forces.

On September 16th, the same Captain Andrew T. Woodall, will take the stage at the Henry C. Chambers Waterfront Park as a warm up act for the Lt. Dan Band Concert. At 6 Captain Woody and the Blue Suede Soul Band will lead off with memories of Elvis honoring our troops. For several years, this group has performed for our healing troops at Walter Reed National Military Medical Center and National Naval Medical Center in Bethesda. They are also popular entertainers at Rolling Thunder Events. For more information about Fire Engine 343 and Captain Woodall, contact the captain at 919-291-3441.

The Lieutenant Dan Weekend takes place from September 14-18, 2011, at Palm Key in Ridgeland and Beaufort. Throughout the four days, severely injured veterans from the Iraq and Afghanistan wars enjoy the southern hospitality offered by the Lowcountry and bond with fellow patriots.