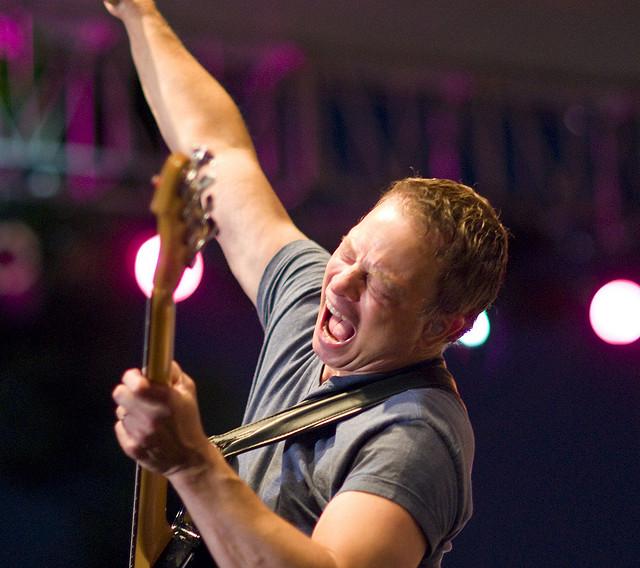 On Friday, September 16,  at 8:30 p.m. in the Henry C. Chamber Waterfront Park, the Lt. Dan Band and film star Gary Sinise will take center stage in front of wounded veterans and their families who are attending the 2nd annual Lieutenant Dan Weekend.

The band is named for “Lieutenant Dan”, the character Gary portrayed in the 1994 film Forrest Gump, a role for which he earned an Oscar nomination for Best Supporting Actor. As Gary began visiting troops around the world, people (even little kids) who didn't know him as Gary Sinise, the actor, would recognize him as "Lt. Dan".

The band plays everything from Stevie Wonder and Jimi Hendrix classics to contemporary songs by Kelly Clarkson, Evanescence, Beyonce, Lonestar, the Zac Brown Band and much more.

Recently, Sinise established the Gary Sinise Foundation with this mission: We serve our Nation by honoring our defenders, veterans, first responders, their families, and those in need. We do this by creating and supporting unique programs designed to entertain, educate, inspire, strengthen, and build communities.

You can listen to Gary’s words about his foundation on YouTube.

Besides the veterans, their families, and Lt. Dan Weekend volunteers, forty-five hundred concert ticket holders will be permitted inside the Henry C. Chambers Waterfront Park by the City of Beaufort Fire Department. Ticket sales are available on-line at www.LDW2.com and cost $25 per person or $15 for members of the military. Tickets may be purchased locally from these merchants:

The week prior to the concert, Lt. Dan Volunteers will sell concert tickets and T-Shirts at a sidewalk location near the Lollipop Shop at 103 West Street Ext in downtown Beaufort. Tickets may be bought on the night of the concert at the Waterfront Park, but advance purchase is strongly encouraged to avoid long lines in that area. The sponsor has created a Web link so people can purchase concert tickets that will be given to local service members: http://www.active.com/donate/localtroop.

Prior to the Lt. Dan Band performance at 8:30, three opening acts will entertain concert goers between 6:00 PM and 7:45 PM. Captain Woody and the Blue Suede Soul Band will lead off with memories of Elvis honoring our troops, followed by Brother Gravity. For several years, both groups have performed for the troops at Walter Reed National Military Medical Center and National Naval Medical Center in Bethesda. They are also popular entertainers at Rolling Thunder Events.

Taking the stage around 7:15 PM is SIREN, a rock band with a front man in a wheelchair. Ron Weinreich, the band’s founder and star, left the United States as a teenager to serve in the Israeli Army. As a tank commander, he was critically injured during the Second Lebanon War when a massive concrete arch collapsed on his tank. Ron was exposed at the turret and his spine was crushed. During four years of intense rehabilitation, Ron’s childhood idol, Gene Simmons, the front man for Kiss, sent him a video message telling him he was a real hero … his hero. Since then, Ron has become an accomplished musician, singer, and songwriter. His lyrics relay a message, “Get involved; take responsibility for yourself and the world we live in.” For information about the band SIREN, visit www.iamsiren.com. Learn more about Ron Weinreich’s story at: www.youtube.com/watch?v=oRb3tpeOS84

On the evening of September 16th, gates to the Henry C. Chambers Waterfront Park will open to the general public at 5 p.m. Concert tickets, food and beverages, beer, wine, Lt. Dan T-shirts, and other souvenirs will be available for purchase. Please note that credit cards cannot be accepted for payment that evening. Ticket holders are encouraged to bring folding chairs or blankets for seating. No coolers, strollers, food or beverages may be taken inside the fence surrounding the waterfront park. Service dogs are allowed inside, but pets are prohibited within the enclosed area. Handicapped parking will be available at the City Parking Lot adjacent to the waterfront park and the marina. However, parking in that lot, also known as Lanier Parking, will be restricted to non-handicapped concert attendees until LDW2 veterans and active duty military guests have parked and entered the concert area. Parking attendants will make any remaining spaces available to the public by 8 p.m.