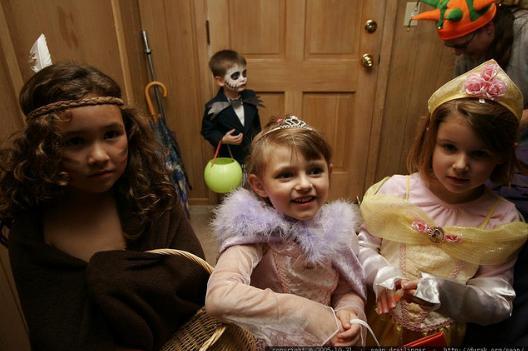 4:12 am on Friday October 29, 2010 | Posted by
Will Beaufort's kids shout 'Trick or Treat' on Saturday or Sunday? (update: Savannah craziness)

Thought it was silly how it took so long for our area to come to a consensus?

Well be glad we're not a community like Savannah where officials pushed to observe the festivities on Saturday. That set off a tiff with Tom Barton, editorial page editor of the Savannah Morning News, who in a column said, "Saturday night is the absolute worst night," and noted that this combines young trick-or-treaters with the adult drunken masses.

And that helped earn Savannah lead feature in a New York Times piece "The Tricky Business of Halloween Sunday." Which is actually a pretty good read about the many faces of the debate, especially here in the bible belt.

Oh, and in the Times' piece there's a photo of Beaufort local Jim Palmer.

Seems whenever Halloween falls on a Sunday people question whether to send the kids out on Halloween or the night before, and that discussion persists around Beaufort this year.

Although WSAV's Holly Bounds tweeted that Beaufort Mayor Billy Keyserling has proclaimed that trick-or-treating will occur on Sunday, and the Beaufort Regional Chamber of Commerce has posted the same on its website, seems some communities still are calling for the trick-or-treaters to come out a day early on Saturday.

So do plan to go out on Sunday, not Saturday, (unless you're heading out to Thursday's trick-or-treating at downtown Beaufort's shops.)

The Island Packet filed a report on this quandary, though it only includes news out of Bluffton, Hilton Head and Savannah.

But we found an interesting Facebook stream among Beaufort residents whom were asked: "Saturday or Sunday?" You can check out the replies here.

Fear not, Beaufort, between the Facebook post and Mayor Billy's proclamation it seems Halloween will be on October 31st after all.