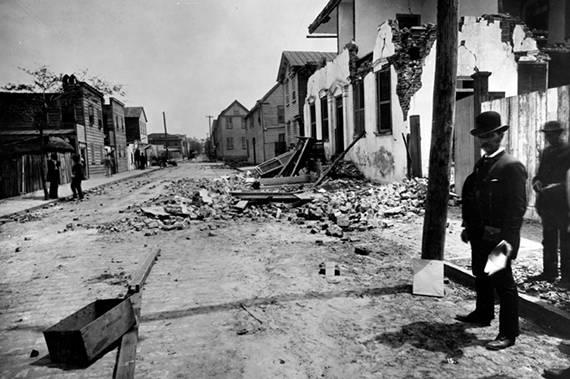 USGS
A photo after the 1886 quake in Charleston, shot shows a fissure and a wrecked brick house on Tradd Street.

“Upheaval in Charleston: Earthquake and Murder on the Eve of Jim Crow,” a gripping account of natural disaster coupled with turbulent social change will be the topic at the Historic Beaufort Foundation's January’s Dinner & A Lecture at the Verdier House, 801 Bay Street, Monday, January 23, at 5:30 p.m.

The non-fiction work by Charleston historian Stephen Hoffius and  scholar Susan Millar Williams reads like fiction, but it is a real-life account of a volatile time in a city struggling to determine how blacks and whites would coexist a generation after the Civil War.

Set against the backdrop of the earthquake of 1886 and with the city of Charleston itself as a character, the story illuminates the growth of Jim Crow attitudes and their inhibition of Charleston’s economic and cultural progress. At the center, standing against decadence and corruption, was Francis Warrington Dawson, the British expatriate editor of the News & Courier. In trying to find common ground between the races, Dawson lost his life.

Hoffius is most recently known in Beaufort County for co-editing “Northern Money; Southern Land: The Lowcountry Plantation Sketches of Chlotilde Martin.” Martin’s articles printed in the Charleston papers in the first half of the 20th century are largely credited with beginning preservation awareness in Beaufort. Williams teaches American literature and creative writing at Trident Technical College and is author of a biography of Julia Peterkin, South Carolina novelist and 1929 winner of the Pulitzer Prize for fiction.