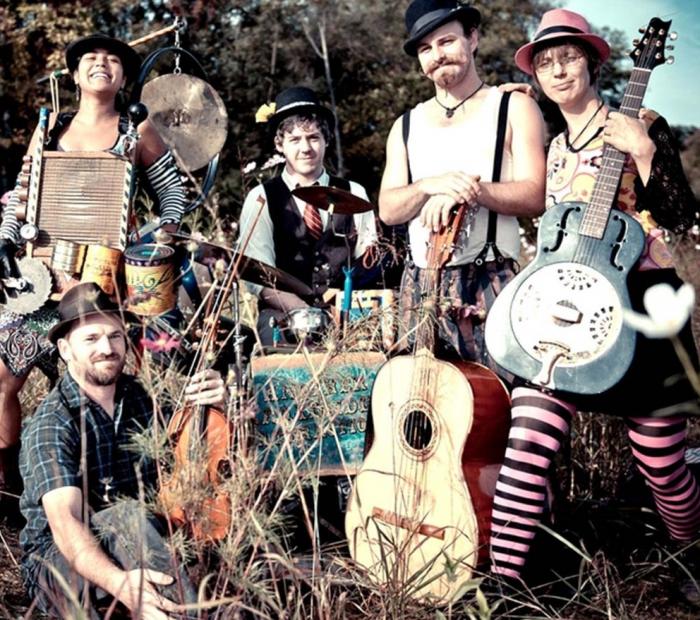 Another Roadside Attraction performs on June 1.

Don't forget to bring a chair.

The event is from the Town of Port Royal and produce by ARTworks.

Here's the musical lineup for each date:

"The Music of Your Life" by Terry Herron and the Savannah Jazz All Stars
6:30pm Saturday, May 18
A virtual potpourri of American Standards, as performed by Sinatra, Tony Bennett, Michael Buble, Neil Diamond and James Taylor. Croon-meister Terry Herron is your Vocalist and M.C, and a surprise female vocalist will deliver American classics in the styles of Ella Fitzgerald, Billie Holiday, Lena Horne, and maybe even a little Patsy Cline. Call it an "Easy Listening Swing, Straight ahead Bebop Jazz, Country, Bossa Nova Concert." This all-star Quintet features the Lowcountry's best improvisational musicians, professionals who'll blow your socks off with great renditions of Blues, Jazz, Big Band Swing, and their own unique styles, on piano, trumpet, saxaphone, flute, drums, and bass.

Garden & Gun magazine praises them: "Another RoadSide Attraction brings a cabaret presence to the stage along with a fully acoustic potluck of instruments, including a fiddle, a banjo, a kazoo, a musical saw, a box o' wrenches, a ukulele, and a made-from-scratch drum kit sporting an American Tourister suitcase in lieu of a kick drum. "Samsonite was lacking, as a drum," explains Jordan Rivers, the band's guitarr'n player and one of its founding members. The sextet's music is as distinctive and colorful as its look - beautiful, bizarre, sometimes eerie, and always fun."

Cathy Fink & Marcy Marxer
6:30pm Saturday, June 15
Cathy Fink & Marcy Marxer are Grammy Award Winners for children's songs and folk music: "As close to flawless folk-bluegrass as it gets." - Billboard Magazine. The powerhouse duo has a repertoire of traditional and contemporary folk, old-time country and swing music. Their superb harmonies are backed by instrumental virtuosity on the acoustic & electric guitar, five-string banjo, mandolin, cello banjo, ukulele, percussion and many other instruments. Top it off with a witty stage presence and warm audience rapport and you've got a well loved music duo.

They've earned two Grammy Awards, in 2004 and 2005 for 'cELLAbration: a Tribute to Ella Jenkins' and for "Bon App'tit!". In 2003, they were GRAMMY nominated for their CD, "POSTCARDS" in the Best Traditional Folk Album category. They received another GRAMMY nomination in that category for "Banjo Talkin.'" They produced and performed on Tom Paxton's GRAMMY nominated "Live in the UK" CD and tour. Tom says, "Cathy & Marcy are at home in a dozen musical styles. They swing you, jazz you, and old timey you till you just give up and bliss out."

In 2006 the C.F. Martin Company honored Cathy & Marcy's musical achievements by creating a signature guitar for each of them, the M3H Cathy Fink Custom Signature Edition and the MC3H Marcy Marxer Custom Signature Edition. National sales of the guitar have been impressive. In 2008, the Gold Tone Banjo company released the Marcy Marxer model cello banjo, modeled after Marcy's remarkable Gibson 1918 cello banjo.

Angela Easterling and the Beguilers
6:30pm Saturday, June 29
"Angela Easterling has a golden glowing voice and she writes observant songs about contemporary life. She can weave urban sprawl and cultural shifts into songs as gingerly as love and relationships." - Craig Havighurst, Music City Roots

Angela Easterling is a farm-raised, South Carolina-bred, All-American girl; her country roots run deep, and her music carries the flavor of her distinctly American culture and upbringing. So why would she do an album (Mon Secret, 2011) of original songs in French? Angela's answer, "Why not", she laughs. Why not, indeed, when the result speaks for itself: a combination of sweet southern Americana music and the lovely, romantic language spoken along The Seine, coming together to create something truly unique and unexpected. In 2012, Angela was named a Wildflower Performing Songwriter Finalist. In 2009 & 2010 she was a Kerrville New Folk Finalist, and in 2011, a Telluride Troubadour Finalist. The Boston Herald named her song "The Picture" "Best Political Country Song" in their 2009 Year's best music. Her music has been featured in commercials and Animal Planet, and the Smithsonian Institution's exhibit New Harmonies: Celebrating American Root's Music.