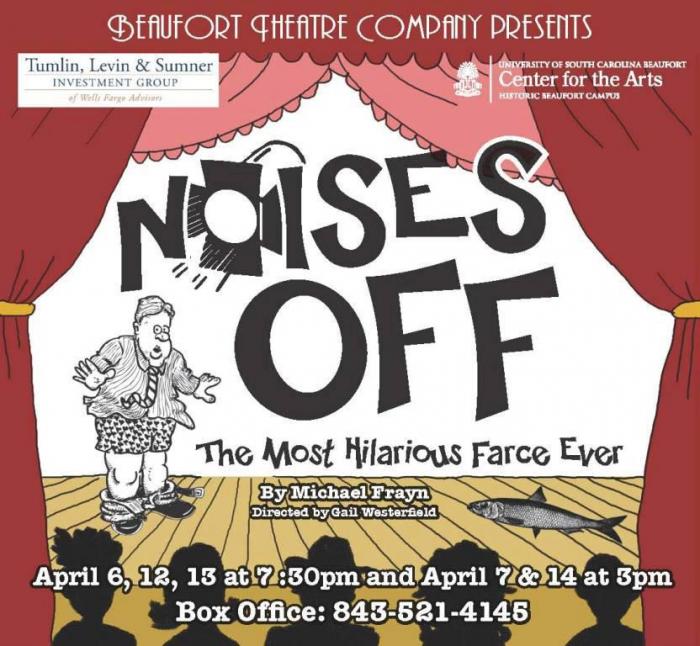 The Beaufort Theater Company will present "The Greatest British Farce Ever: Noises Off" on April 6 through 14.

What is it? As the theater company says, "Hilarious double entendres! Pratfalls! Hot girls in lingerie! Men without pants! But most importantly: Doors and sardines!"

Here are more details from the group:

Michael Frayn's brilliant British farce, "Noises Off" follows a highly dysfunctional and none too bright cast of second rate performers through a final rehearsal of a dreadful bedroom farce, "Nothing On," to a second act that takes place mainly behind the scenes (come see the two-story, seven-door set rotate!), to a hilariously disastrous final performance after a twelve-week tour full of bickering love triangles, half-clad ingenues, cute Brittish accents, and sardines, sardines, sardines!

Starring Elaine Waite, Alan Purdy, Jason Marion, Joellen Hirschey, Eddie Watson, Christine Grefe, Shawn Sproatt, Benji Morgan, and Dave Helmer.
Soooo much funnier than the 1992 movie, by the way, in the humble director's (Gail Westerfield) opinion. Critic Frank Rich called "Noises Off" "the funniest play written in my lifetime," and the film "one of the worst ever made."