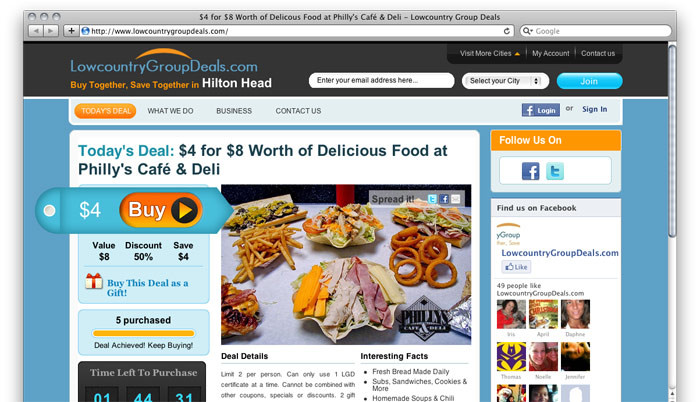 3:13 pm on Tuesday December 14, 2010 | Posted by Ken Hawkins
Beaufort getting its own local discount site (update: live in South of Broad, Beaufort soon)

Right now they're serving up deals South of the Broad for Hilton Head and Bluffton, and their operators promise and expansion to Beaufort -- and Savannah, Charleston and Mount Pleasant.

You can see Bluffton deals here and Hilton Head ones here.

First reporting, November 20: Perhaps you've heard of those daily discount deal sites like Groupon or Deal Mobs where you buy a coupon at a local business at a steep discount?

If not, they basically work like this: Pony up some cash now, say $10, and you'll get a voucher that's good for the next several months that is usually worth a good bit more than you paid, say, $13, $15, or $20. The idea is you, dear customer, save a bundle, the business gets new customers in the door that will hopefully come back, and the company in the middle gets a little cut.

Well those sites have been taking off across the country and in neighboring cities like Savannah and Charleston, but we in Beaufort, Bluffton, and Hilton Head have been left out in the cold.

Well, LowcountryGroupDeals.com sees an opportunity and expects to quietly launch within the next week, offering separate sets of deals for the three different areas.

So stay tuned and we'll let you know when the deal are flowing and we'll keep an eye out too for any local mega deals.